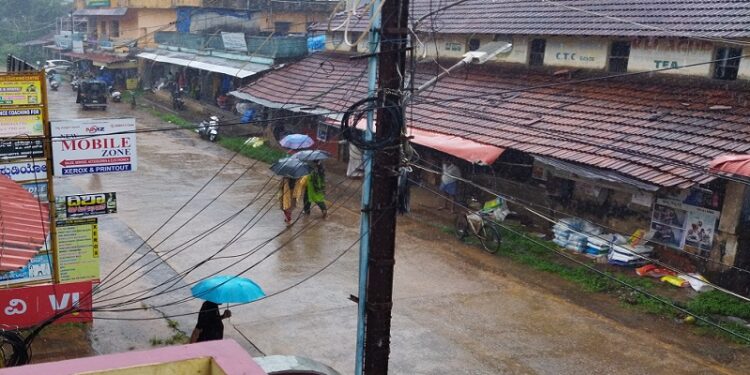 Heavy rainfall has been pouring down in coastal Karnataka for the past two days. Karnataka heavy Rainfall till June 26, issued Red and Orange alert. According to the IMD, during the next five days, intense spell of rainfall is very likely to continue in Karnataka.

Karnataka heavy Rainfall Red Alert has been announced as a precautionary measure in the wake of heavy rainfall in Dakshina Kannada district. the waves of the sea are raging because of rain and wind. The district has warned fishermen and tourists not to go to sea for any reason.

Met Office also said that isolated heavy rainfall is likely over the Coastal Karnataka, ghat till June 26. It is raining in many places including Honnavar, Karwar and Bhatkal in Uttara Kannada district. For expecting Karnataka heavy Rainfall district administration issued Red Alert.

On the other side, Coast Guard personnel have rescued fifteen fishermen who were threatened by waves at sea. Also, people on sea side have been advised to be careful. Rain is also continuing in Udupi district. Karnataka heavy Rainfall in parts of Udupi, Kundapur, Brahmavara, Kota and Karkala.

The rain is likely to continue for the next three days. Bengaluru has recorded 198.5 mm of rainfall since June 1, breaking a 10-year-old record and making this month the wettest in a decade. The last time the city came close to breaking this particular record was in June 2016 when the city witnessed 191.3 mm rain.

Karnataka as a whole must brace for more rains, the India Meteorological Department (IMD) said. Coastal Karnataka is on orange alert till Friday while interior parts of north Karnataka are on yellow alert till Sunday.

Uttara Kannada, Dakshin Kannada and Udupi will be on orange alert until Saturday, with most other districts in interior Karnataka on yellow alert for the same period. Waterlogging, damage to trees, isolated flooding of low-lying areas, and traffic congestions can be expected in some districts, the IMD warned.

2nd PUC pass students, here is good news for you