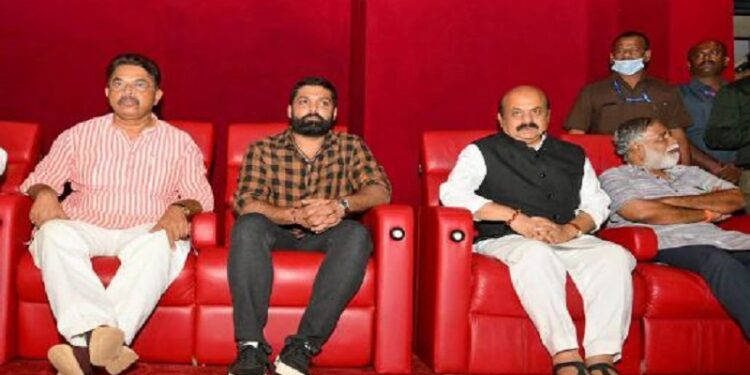 Karnataka government on Saturday issued a state goods and service tax (SGST) exemption for Rakshit Shetty starrer Kannada film 777 Charlie. The SGST exemption will be exempted for certain months from June 19 to six months. The government has suggested that the new ticket, which is not covered by SGST, should be sold from June 19.

Rakshit Shetty, who is also a producer of the film, has appealed to Chief Minister Basavaraja Bommai for a tax exemption of 100 per cent. Inbreeding has raised awareness of the impact on dogs’ well-being and the message of adoption of street dogs. The producers had mentioned in the plea that the nuances of animal violence were upheld.

Considering this, the chief ministers said the tax exemption would help the message to more people. Karnataka Chief Minister Basavaraj Bommai broke down after watching Rakshit Shetty’s new film 777 Charlie on June 13. 777 Charlie, which celebrates the bond between a man and his dog, was released in theatres on June 10 in five languages.

It is a rather emotional film as Basavaraj Bommai couldn’t hold back his tears after watching 777 Charlie as he remembered his dog. A picture of the chief minister has emerged where he was seen crying profusely after watching the film. CM Bommai absolutely loved the film and was all praise for the makers and also urged everyone to watch it.

“There have been movies about dogs but this movie has synchronisation with emotions and animals. The dog expresses its emotions through its eyes. The movie is good and everyone should watch it. I keep talking about unconditional love. Dog’s love is unconditional love which is pure,” the CM said

Bommai is a dog lover himself. He was heartbroken after his pet dog passed away last year. Here are pictures of Bommai and his family as they mourned the loss of their pet dog. Directed by K Kiranraj, 777 Charlie is an adventure comedy drama. The film stars Rakshit Shetty, Sangeetha Sringeri, Raj B Shetty, Danish Sait and Bobby Simha in important roles.

It is produced by Rakshit Shetty and GS Gupta under Paramvah Studios. It is a film for all animal, especially dog lovers. The film beautifully encapsulates the bond between a human and a pet dog. 777 Charlie was released in Kannada, Tamil, Telugu, Malayalam, and Hindi.