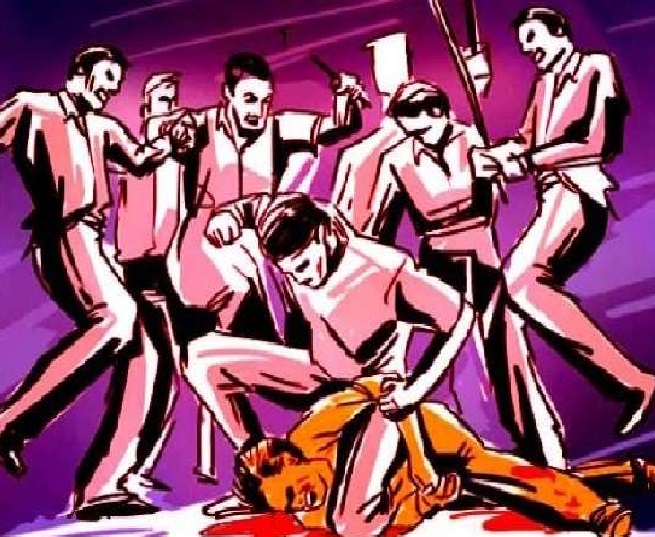 Vijayapura: An angry crowd is seen thrashing a man with sticks and shoes after he is pinned to the ground in a video from Karnataka’s Vijayapura district. The man – a Dalit- told the police that he was stripped on Saturday and thrashed with his family after he “had touched a bike of a man who belonged to the upper caste”.

A counter case was filed today that said the crowd was angry because the 32-year-old Dalit man “took off his clothes and made obscene gestures when two girls at the site were washing clothes”.  The Dalit man reached a nearby police station to file a complaint after he was beaten with his family on Saturday. “An atrocity case was reported in Talikote on Saturday about assault on the Dalit Man from Minaji village.

It was alleged that when he accidentally touched the bike of a man who belonged to the upper caste that he and his family members were assaulted by some 13 men,” said senior police officer Anupam Aggarwal. Thirteen people were named in the police complaint filed over the assault; some of them were later called for questioning. The case was registered under SC/ST Act and sections 143,147, 324, 354, 504, 506, 149 of Indian Penal Code (IPC).

“When an investigation team reached the site of the incident today, they were told that the 32-year-old was beaten up when he took out his clothes and started showing his private parts to two girls who were washing clothes. We have registered a counter case under section 354 of the IPC,” Mr Aggarwal added.

'Failure of institution' that person like gangster Vikas Dubey got bail, says SC