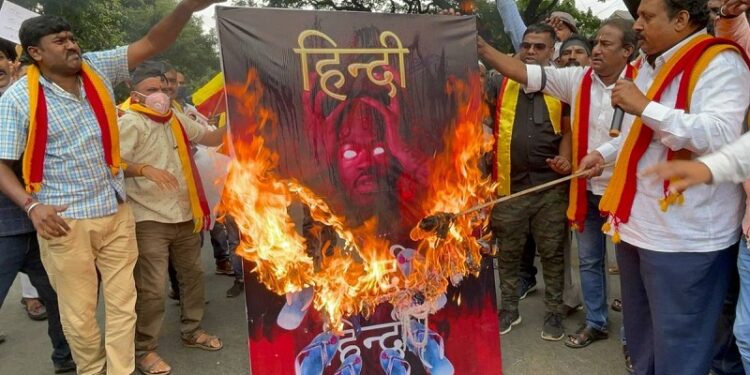 In protest against the “imposition of Hindi”, Kannada organisations on Tuesday held a twitter campaign and picketing in front of banks in several parts of Karnataka, on the occasion of Hindi Diwas.

The Karnataka Rakshana Vedike (KRV) has organised a Twitter campaign with hashtag “#StopHindiImposition” from 10 am to 10 pm on Tuesday, while its activists staged picketing in front of banks in different parts of the State.

KRV has tweeted pictures of its activists staging picketing in Sedam, Chincholi, Ron, Hungund, Hiriyur, Pandavapura, Bengaluru, Vijayapura, Kalaburagi, Chikkaballapura, Thirthahalli, Udupi, Uttara Kannada, Kolar, Mandya and Dharwad, among several other places. They submitted a petition to managers of the banks urging them to stop alleged Hindi imposition and to provide services in Kannada.

According to Arun Javgal, state organisation secretary of Karnataka Rakshana Vedike (KRV), the intention behind conducting protests in front of nationalised banks is also to raise awareness among the masses and thereby tell the people of Karnataka about the way, “Hindi Imposition” has snatched thousands of jobs from Kannadigas in Banks operating in the state.

“Using the Taxpayers money from across the country and yet, giving undue importance only to Hindi in a multilingual country like India is something KRV opposes vehemently,” he said in a tweet.

KRV state President Narayanagowdru T A termed Hindi Diwas celebrations as “anti-democratic and immoral”. “It (Hindi Diwas) is against the intent of the constitution which says all citizens are equal ,” he said, as he called on all non-Hindi speaking communities and those Hindi speakers, who believe in equality, to oppose it.