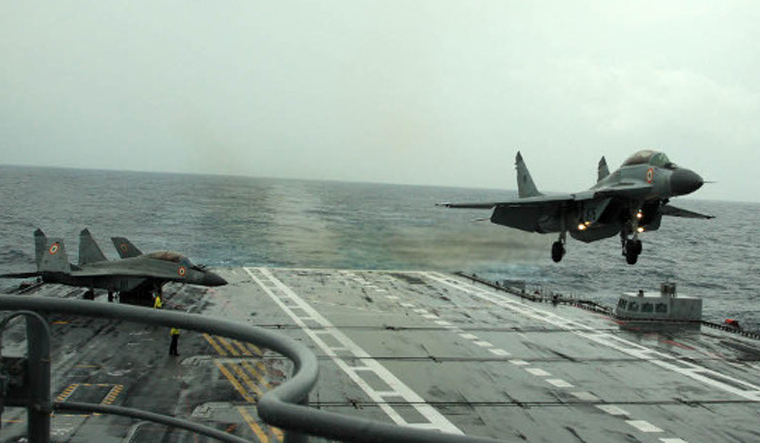 New Delhi: As India awaits the delivery of the first batch of Rafale fighter jets, which are likely to be deployed near the Line of Actual Control with China, the Navy may be sending its MiG-29K multirole fighters to the Northern sector too including on deployment near Eastern Ladakh.

According to government sources, there are plans to deploy the MiG-29K at an Indian Air Force base in the northern sector, where they may be used for “carrying out operational flying” in the Eastern Ladakh sector along the Line of Actual Control (LAC).

India has deployed MiG-29s, Su-30MKIs and Apache attack helicopters near the border with China, after additional Chinese fighter jets, bombers and attack helicopters were noticed at four Chinese bases near the LAC. The MiG-29Ks won’t be the first time the Navy’s air wing is involved in the mountainous regions of Ladakh: The Navy’s P-8I surveillance aircraft have also been spotted in the region.

The Indian Air Force was the first non-Warsaw Pact nation to receive the MiG-29 in 1986. The MiG-29 was designed as a short-range air superiority fighter, meant to shoot down enemy aircraft at both short-range and beyond-visual range. It is significantly lighter and smaller than the Sukhoi Su-30MKI. The Navy also acquired 45 MiG-29K fighters, which are upgraded naval versions of the MiG-29M, and are meant to serve onboard INS Vikramaditya, India’s only active carrier in service.

The Indian Air Force purchased 78 MiG-29 fighters since the 1980s and the fleet currently totals over 60 aircraft. Three squadrons operate the MiG-29. In 2009, the Indian Air Force began an upgrade of its MiG-29 fleet to equip it with new electronics, radar and the capability to fire air-to-ground weapons. The upgraded MiG-29, referred to as the MiG-29UPG, also has a distinctive ‘hump’ behind the cockpit for a large fuel tank to boost its range.

“There will be no lockdown from tomorrow”: CM BS Yediyurappa