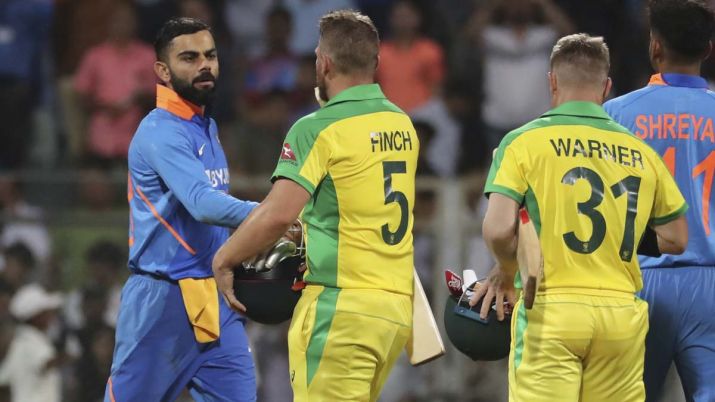 Warner opened the batting with Finch and the duo made the most of the flat track at the Wankhede as they looked absolutely unstoppable. They went after the Indian bowlers right from the start and bossed the chase. Warner was the first to notch up his century as he slammed an unbeaten 128 off 112 balls laced with 17 fours and 3 sixes. Finch scored a magnificent 110 off 114 balls with the help of 13 fours and 2 sixes.

It was a below-par bowling performance from India as none of the pacers or spinners managed to get a breakthrough when Finch and Warner took charge. The likes of Mohammed Shami and Jasprit Bumrah, who was playing his first ODI after a long lay-off, were thrashed all around the park by the explosive Australian openers.

Warner and Finch added an unbeaten stand of 258 runs for the opening wicket and finished off the chase in the 38th over with the southpaw scoring the winning runs off Shami. Shardul Thakur recorded the worst economy among the Indian bowlers as he conceded 43 runs off his five overs while going wicketless. Bumrah and Shami conceded 50 and 58 runs respectively in their quota of 7 and 7.4 overs.
Kuldeep Yadav had a decent outing in terms of restricting the run flow but failed to find a breakthrough conceding 55 in his ten overs. The emphatic victory means Australia are now 1-0 up in the three-match series and India have a lot of questions to answer ahead of the second ODI in Rajkot on Friday.

While the bowlers disappointed, Indian batsmen were also far from their best as the Aussie bowlers dominated the proceedings. After being asked to bat first, India lost Rohit Sharma cheaply before Shikhar Dhawan and KL Rahul steadied the ship with a 121-run stand for the second wicket with knocks of 74 and 47 runs respectively.

The middle-order then failed to fire with Australian bowlers running the show. Pacer Mitchell Starc was the pick of the bowlers for the visitors with excellent figures of 3/56 in ten overs helping his side bundle out India for a paltry 255.