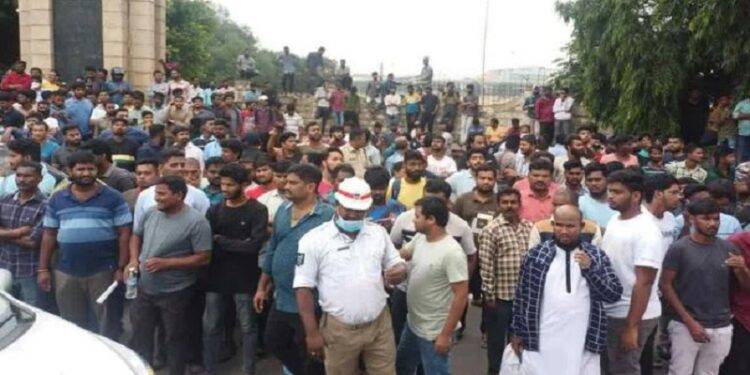 Several fans were injured after a stampede-like situation broke out in Gymkhana Grounds, Secunderabad after the former had gathered to buy offline tickets on Thursday for the third T20 cricket match between India and Australia scheduled to be held Rajiv Gandhi International Cricket Stadium in Hyderabad on September 25. Many fans were injured in the ensuing melee while around 20 got injured during a lathicharge by police personnel.

As the Hyderabad Cricket Association (HCA) announced sale of around 3,000 tickets offline at the Gymkhana grounds from 10am, more than 30,000 fans made a beeline at the ground since morning. According to additional commissioner of police (law and order) DS Chauhan, the HCA had not made any proper arrangements at the grounds for maintenance of the queue at the ticket counters, as a result of which there was a mad rush of people, who started pushing and jostling each other.

“This led to a stampede-like situation. Some of the people, including a woman, fell unconscious in the melee. We immediately rushed them to a corporate hospital nearby and they are out of danger,” Chauhan said. With the situation turning tense and going out of control, additional police forces rushed to the venue and resorted to lathi-charge to disperse the unruly crowd, resulting in injuries to many people.

“Some police personnel, too, sustained injuries in the attack by the angry mob,” he said. While the HCA put up only a limited number of tickets for sale offline, the queue of the fans stretched up to more than a kilometre. This led to a stampede-like situation, Chauhan said. In fact, people had been visiting the HCA office at Gymkhana grounds for tickets since Wednesday morning, as the sale of tickets online could not be done due to a breakdown of servers.

Many of them tried to jump over the Gymkhana gates to enter the HCA office, but the police managed to prevent them from doing so. Chauhan said the HCA had not made arrangements even for drinking water for such a huge crowd. “We shall inquire into the lapses of the HCA and issue notices to the management for questioning,” he said, adding that stringent action would be taken against them, if there were any lapses.