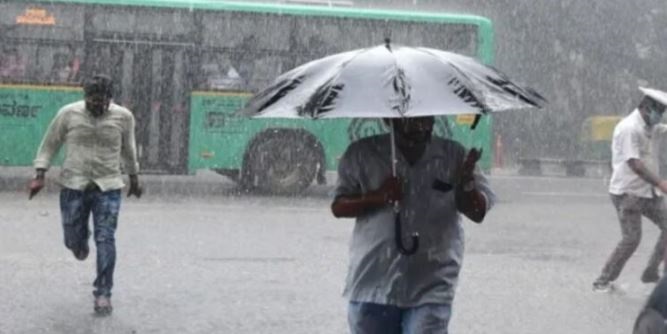 Forecasts from the India Meteorological Department (IMD) suggest that fairly widespread to widespread light or moderate rainfall with isolated heavy showers (64.5 mm-115.5 mm), thunderstorms and lightning are very likely over Tamil Nadu until next Wednesday, August 31. . IMD issued heavy rainfall alert in these states for next 5 days.

IMD issued heavy rainfall alert in Tamil Nadu districts are in for a fresh spell of precipitation starting today. The rains are expected to last for the next five days at least, and all major cities of the state will remain on alert for the durationAnd during this five-day period, the entire state will remain on yellow watch so as to urge locals to ‘be updated’ about the inclement weather.

IMD issued heavy rainfall alert Because of these conditions, fishermen are advised against venturing into the sea for the next two days. The neighbouring states of Kerala, Karnataka, Andhra and Telangana are also in for similar conditions for the next few days. A trough has developed between the Andhra Pradesh and Tamil Nadu coasts, and this trough is expected to give rise to a cyclonic circulation in the region producing copious showers.

In addition to this, onshore northwesterly winds will also contribute to the heavy rains over South Peninsular India. Meanwhile, thanks to westerly winds from the Arabian, South India has endured wet weather all week. And on Thursday (August 25), the Tamil Nadu capital Chennai witnessed a sudden spell of intense precipitation. And these downpours lead to severe waterlogging, traffic snarls and a general disruption of life in the city.

Heavy rains are set to continue over Kerala for the next five days, with Kasargod, Kozhikode and Idukki likely to be among the districts that will bear the brunt of rough weather for the next 24 hours. As per the India Meteorological Department (IMD), fairly widespread to widespread light to moderate rains, along with isolated heavy falls (64.5 mm-115.5 mm), thunderstorms and lightning are expected across Kerala from Thursday to next Monday (August 25-29).

Within the state, the IMD’s regional met centre in Thiruvananthapuram has issued an orange alert over the districts of Kasargod, Kannur, Kozhikode, Malappuram, Thrissur and Idukki for Thursday. The advisory urges the residents to ‘be prepared’ for rough conditions. Thereafter, all districts in the state will be placed on a yellow watch from Friday to Sunday (August 26-28). This alert level advises the locals to ‘be aware’ of the weather situation.