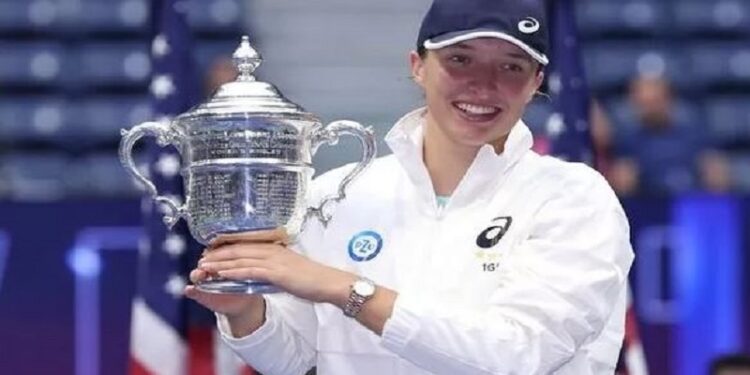 With her victory at Flushing Meadows in New York, the fourth and final grand slam of the year, Swiatek claimed her third Grand Slam trophy after she won the 2020 and 2022 French Open. Iga Swiatek wins US Open title for the first time.

The Polish superstar raced to a dominant first-set win on the hard courts of the USTA Billie Jean King National Tennis Center. However, Jabeur made things complicated for the 21-year-old in a marathon second set.

The title, which Great Britain’s Emma Raducanu won in 2021, was the first time a No1 seed won the US Open final since Serena Williams in 2014.

The men’s final takes place on Sunday as Carlos Alcaraz (ESP) will take on Casper Ruud (NOR).Swiatek became the first woman to win seven titles in one year since Serena Williams in 2014.

“You have to be mentally strong throughout the whole tournament,” Swiatek told ESPN. “It wasn’t easy. I know I didn’t play perfectly. Sometimes you have to accept that. There’s going to be noise, but you just have to switch it on in the important moments.

“It’s totally different than on clay, because on clay I feel like I’m at home. But here it was such a new experience for me, so I’m even prouder.”

The world No1 also matched a Serena Williams record by claiming her tenth straight finals victory. And she would be forgiven for feeling like she was at home seeing that New York City is home to one of the largest Polish communities in the US.

“When I started winning, it was during COVID, so honestly this is a pretty new situation for me. The power they [Polish fans in New York] give me is surreal. I didn’t expect to feel so many people have my back. It’s a dream come true for sure.”