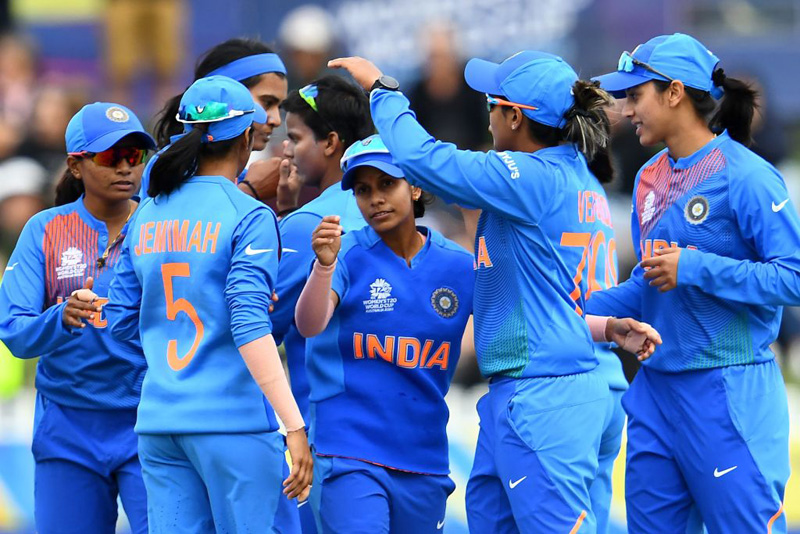 MELBOURNE: Continuing their excellent run, India whipped New Zealand by three runs in a last-ball spine chiller in the vital gathering A match of ICC Women’s World Cup 2020 at Junction Oval in Australia’s Melbourne on Thursday (February 27, 2020). With this success, India additionally turned into the principal group to affirm a billet in the semi-last of the Women’s T20 World Cup 2020 after another prevailing collaboration.
The Harmanpreet Kaur-led side was able to maintain pressure on the rivals by taking early wickets as the Kiwis began the 134-run chase. Shafali Verma was once again the star with the bat for India as she slammed a well-composed knock of 46 runs off 34 balls laced with three sixes and 4 fours.
Chasing 134, Rachel Priest (12) lost her wicket in the second over of the innings and New Zealand was given a major hit at the beginning of their innings. Soon after, Deepti Sharma clean bowled Suzie Bates (6), reducing the Kiwi side to 30/2 in the sixth over.  Bowling star in the previous two matches, Poonam Yadav got in the act once again as she dismissed Sophie Devine (14) and this put India in firm control of the match. This was the first time in seven T20I innings that Devine was dismissed for less than 50.
Maddy Green and Katey Martin then tried to revive the innings for the Kiwis as the duo put on 43 runs for the fourth wicket. However, a spirited India came back strongly in the match as the side dismissed Green (24) and Martin (25) in quick succession, with New Zealand still 44 runs away from the target. India spinners managed to create a stranglehold in the final overs. Amelia Kerr tried her best to bring New Zealand in the match, but in the final over, Shikha Pandey kept her cool to keep India undefeated in the tournament.
Earlier, a spirited bowling performance helped New Zealand restrict India to 133/8 in the allotted twenty overs despite a good start. Opener Shafali top-scored with a 34-ball 46, while Taniya Bhatia chipped in with a 25-ball 23. India, however, frittered away a solid start to manage a low score as the side lost its opener Smriti Mandhana (11) with just 17 runs on the board. Shafali Verma and Taniya Bhatia then put on 51 runs for the second wicket, to keep the scoreboard moving at a brisk pace.
New Zealand came back strongly in the match as the side dismissed the next six Indian batswomen in quick succession. Shafali Verma (46) was sent back to the pavilion in the 14th over by Amelia Kerr and this proved a major roadblock for the Indian side. In the final two, Shikha Pandey and Radha Yadav added a few runs to take India`s score past the 130-run mark. For New Zealand, Amelia Kerr and Rosemary Mair scalped two wickets each.
Brief Scores: India 133/8 (Shafali Verma 46, Taniya Bhatia 23, Amelia Kerr 2-21) defeat New Zealand 130/5 (Amelia Kerr 34*, Katey Martin 25, Shikha Pandey 1-21) by three runs