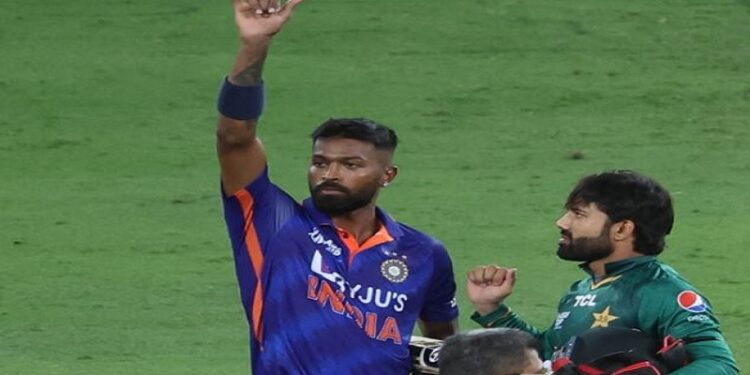 Team India’s star all-rounder Hardik Pandya, who performed as an all-rounder against Pakistan in the Asia Cup, has been promoted in the ICC T20 rankings. India’s star all-rounder, who has achieved such a special feat for the first time in his career, took 3 wickets against Pakistan in the first match. Then Pandya, who was brilliant with the bat, scored 33 runs in 17 balls. This unbeaten innings came to the rescue of Team India.ICC T20 Rankings: Hardik Pandya moves to 5th position in all-rounder quota.

Pandya has taken a huge lead in the T20 all-rounder ranking and has now reached the 5th position. Pandya’s rating point is 167, which is his career best. The top position is occupied by Afghanistan’s Mohammad Nabi with 257 rating points. Meanwhile, Australia’s dangerous batsman and part-time off-spinner Glenn Maxwell is a notch above Pandya.

At the same time, there is no new entrant in the T20 batsmen rankings, but Pakistan’s Mohammad Rizwan is close behind Babar Azam. Rizwan, the opener who scored 43 runs against India, reached the second position. Pakistan captain Babar Azam remains at the top. That is, top 2 is occupied by Pakistan.

Talking about Pandya’s performance, this year has been amazing for him. Pandya made a brilliant comeback from injury to first lead Gujarat Titans to the IPL title. Later he also took over the captaincy of Team India. In fact, during the Asia Cup 4 years ago, Pandya was injured in a match against Pakistan.

He was taken off the field on a stretcher with a back injury. Pandya took a long time to recover from that injury and regain his old rhythm. But Pandya, who has returned to the cricket arena with a wonderful form, is playing an important role in the victory of Team India.