by News Next Desk
in CRIME, SPORTS, LATEST NEWS 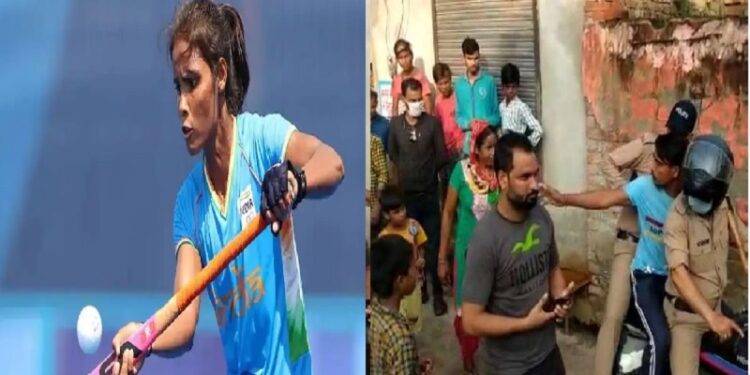 Haridwar: Public outrage soared high on the social media when the family of Indian Women’s Hockey Team star player who scored a hat trick in her last match against South Africa last month were abused with castiest slurs by two men allegedly belonging to ‘upper cast’ in Haridwar.

According to reports, the police have arrested one of the two upper-caste men, but are yet to file an FIR. The shameful incident happened just hours after the Indian women’s hockey team lost to Argentina at the Tokyo Olympics on Wednesday. According to Vandana’s family members, the two upper-caste men abused them with casteist slurs and also abused the hockey player Vandana Katariya during the process.

“Suddenly, right after the match, we heard loud noises. Crackers were being burst outside our house. When we went outside, we saw two men from our village we know them and they are upper castes dancing in front of our house,” Vandana’s brother Shekhar told media.

“They used caste slurs, insulted our family and said the Indian team lost because too many Dalits have made it to the team. They went on, saying that it’s not just hockey but every sport that should keep Dalits out. Then, they took some of their clothes off and started dancing again…It was a caste-based attack,” Shekhar’s complaint to the police read.

Amazon extends ‘Work from home’ option for employees till January 2022

Amazon extends 'Work from home' option for employees till January 2022