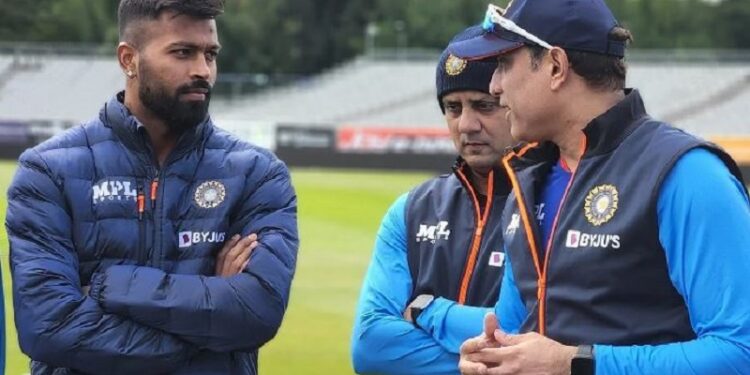 Deepak Hooda produced a super show with the bat as India defeated Ireland by seven wickets in the first T20I at the The Village in Malahide. After a match question raised why did India opt to send out all-rounder Deepak Hooda instead of designated opener Ruturaj Gaikwad in the 1st T20I against Ireland?. Hardik Pandya finally revealed Why Ruturaj Gaikwad didn’t open for India

Team India’s stand-in skipper Hardik Pandya finally revealed answered the buzzing question about Gaikwad’s demotion in the Indian batting lineup after the visitors registered a comfortable win over Ireland in the 1st T20I of the two-game series at The Village on Sunday. While everyone was expecting Gaikwad to kickstart India’s run chase with his partner-in-crime Ishan Kishan, the Indian think tank was forced to make a last-minute change that seemed to look like a tactical decision.

Interestingly, Gaikwad was supposed to open the innings with Kishan in the rain-marred contest between India and Ireland. However, the Chennai Super Kings (CSK) opener picked up a niggle which prevented him from opening the innings with the Mumbai Indians (MI) star at The Village. Speaking at the post-match press conference, stand-in skipper Pandya opened up about Gaikwad’s injury scare.

“Rutu had a niggle in his calf. We had the choice of taking a risk and sending him in [to open], but I was not okay with it. A player’s well-being is more important, and [I thought] we’ll be able to manage what happens in the match,” Pandya said. Replacing Gaikwad and opening the innings with Kishan, Team India all-rounder Hooda played a blinder of a knock to help the visitors complete the run-chase in just 9.2 overs.

Hooda smashed 47 off 29 balls as India defeated Ireland by 7 wickets in the 1st T20I at Dublin. “It was quite simple after that, there wasn’t much of a decision to make; whatever our [batting-order] numbers were, we all went up one spot, and it wasn’t a big headache. We wanted to make sure we weren’t taking any chances with Rutu,” he added.