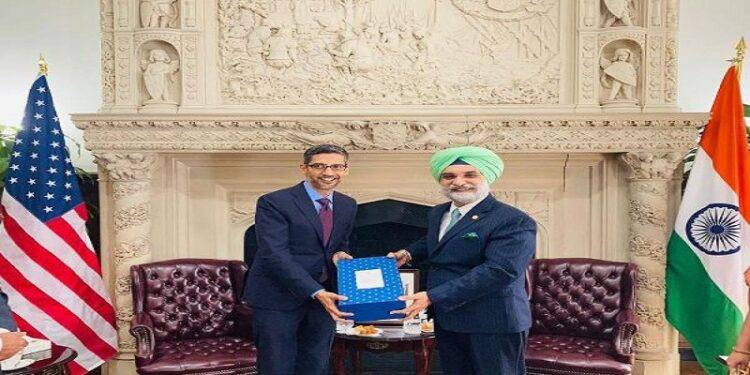 Google CEO Sundar Pichai has visited the Indian Embassy in Washington DC for the first time. At this time, he discussed with India’s Ambassador Taranjit Singh Sandhu about various aspects of the tech company’s activities in the country, especially the digitization efforts.

During the meeting with the Indian Ambassador, Sundar was highly appreciative of the many digitization initiatives undertaken by India. Also, Google has emphasized that it is looking at India in a positive frame.

Google CEO Sundar is said to have discussed various ways to continue Google’s partnership with India, especially in the field of education. He also discussed India’s digitization efforts across multiple sectors in which Google is involved, including digital payments and infrastructure digitization.

Google is a key partner in India’s digital transformation, said India’s ambassador to the US. Also, he opined that it is a priority of the government

By the way, Sundar -led Google has invested heavily in India. Also, it has made its footprint in many fields including its training for the younger generation. Google and its parent company Alphabet played a key role during the Covid-19 crisis last year. They have put a lot of money in terms of supporting India. Sundar Pichai was part of a global task force of US CEOs set up for this purpose.