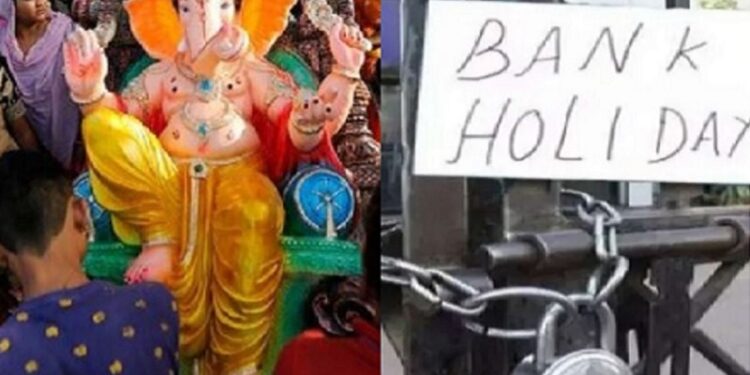 On 31st August is Ganesh Chaturthi which is also known as Ganesh festival. It is a 10-day festival that begins on Chaturthi Tithi and ends on Anant Chaturdashi. Ganesh Utsav will start on 31st August which is celebrated with pomp in many parts of the country especially in Maharashtra. Ganesh Chaturthi Bank holiday: 10 days celebration, 13 days holiday in September.

Worshipers and devotees of Lord Ganesha celebrate the birth of their adorable god in the month of Bhadrapada. This is what we see in the form of Ganesh festival. Now the question is whether banks will be closed on the day of Ganesh Chaturthi on 31st August or will there be work? The answer is that this festival is celebrated in many states where banks are closed on Ganesh Chaturthi.

According to the Reserve Bank of India, banks will remain closed in 7 states of the country on Ganesh Chaturthi. Banks will remain closed in Gujarat, Maharashtra, Karnataka, Odisha, Tamil Nadu, Telangana and Goa on the auspicious occasion of Samvatsari (Chaturthi Paksha), Ganesh Chaturthi, Varasiddhi Vinayak Vrat, Vinayaka Chaturthi on Wednesday, 31 August. There will be no business in all these states on Wednesday.

Reserve Bank issues the list of bank holidays in India. The list of holidays is issued several months in advance so that people can plan for the work related to the bank. There was no such situation on the last occasion that the day of the holiday was not known. As far as holidays are concerned, the Reserve Bank issues it on three bases. This includes national, regional and religious holidays.

If you look at the list of Uttar Pradesh, there was a holiday in banks on 11 August Raksha Bandhan, 13 August second Saturday, 15 August Independence Day, 19 August Janmashtami and 27 August in the fourth week of Saturday. Now on August 31, banks will remain closed in 7 states on the occasion of Ganesh Chaturthi.

Banks are going to be closed for a total of 13 days in September. These holidays include festivals, 2nd/4th Saturdays and Sundays. September bank holiday, Banks will remain closed in Panaji on the second day of Ganesh Chaturthi on September 1 (Thursday). Apart from this, Karma Puja in Ranchi on 6 September, Onam in Kochi on 7 and 8 September, Indrajatra in Gangtok on 9 September, Sri Naravane Guru Jayanti in Kochi on 10 September.

Also Read: Karnataka: Schools and Colleges holiday in this place on September 2