by Anil Gundmi
in DONT MISS, LATEST NEWS
A A 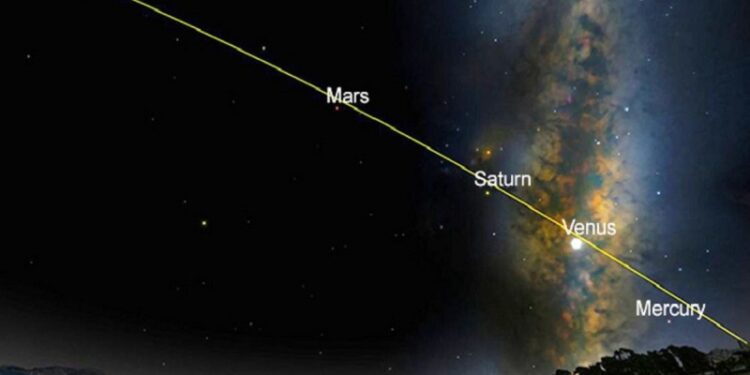 Astrophile will get to watch a thrilling experience as a rare celestial event is set to take place in the last week of April. As per the scientists, sky gazers will get to see four planets aligned in a row, through the naked eye. Four planets will line up behind the moon in the sky this month.

The perfect alignment will provide earthlings a relatively rare opportunity to see multiple planets in the sky with the naked eye. Experts say the celestial treat can be best observed by gazing southeast in the direction of the sunrise about an hour before the Sun comes out. Saturn will be the first to appear above the horizon. It will be followed by Mars, Venus, and Jupiter.

Mars will look like a reddish-orange speck below and to the left of Saturn, while Venus will shine as a bright light down and to the left of Mars. Jupiter, the largest of all planets, will be the lowest and leftmost in the sky. The Moon will appear farther south, just right of Saturn. Though no special equipment is needed, a pair of binoculars or a small telescope will allow you to see Saturn’s famous rings and Jupiter’s four largest moons.

Neptune is also part of the lineup, but its blue-ish icy distant world will only be visible through a powerful telescope. The celestial show will get even more exciting when Venus and Jupiter, the Solar System’s brightest planets, meet in conjunction on April 30, 2022. A conjunction occurs when two astronomical objects appear close to each other because of the way they line up with Earth during their respective orbits.

Also Read: 11 died and 15 injured in electrocution during a chariot procession at temple

Though Venus and Jupiter are hundreds of millions of miles apart in space, they will appear like a single, spectacular star from Earth. While the Moon will be visible above the horizon only until April 29, 2022, the four planets will remain in their aligned positions for a few months. Mercury will join them in mid-June, and the five planets will be visible in the pre-dawn skies until early July.