by News Next Desk
in CRIME, INDIA 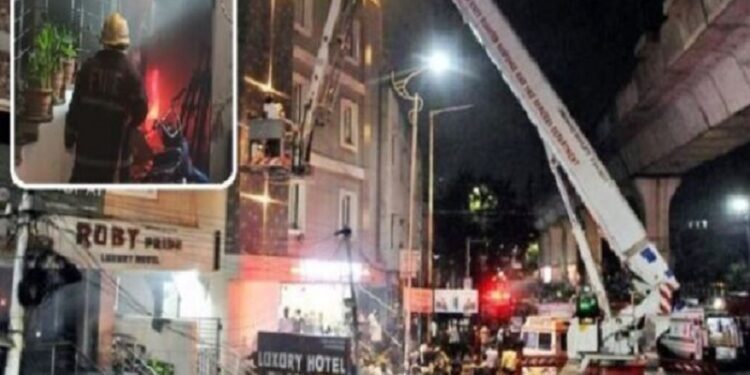 The death toll in fire accidents is increasing. A fire broke out at the Ruby Electric Bike showroom on Monday night, causing thick smoke to spread to the lodge on the upper floor. During the accident, three died on the spot and four died in the hospital. Fire accident in Electric scooter showroom: 8 Killed.

Preliminarily it is known that the accident occurred while charging the electric bike. Meanwhile, the bikes in the showroom caught fire and a huge fire broke out. At the same time, heavy smoke entered the hotel room on the top floor, a fire official explained to the media.

It is said that the death occurred because there was only one way to get in and out of the lodge. All those in the lodge could not come down from the stairs.. 9 people in the building were rescued with the help of a hydraulic crane, he said.

The police arrested Ranjit Singh, the manager of the electric scooter showroom, and registered a case under Section 304A in connection with the massive fire incident. The authorities seized the lodge along with Ruby’s electric scooter. The fire broke out around 9.30 pm on Monday. As some could not escape, they saved their lives by pulling the pipes from the fourth floor and coming down.

Also Read: Two boys have a great escape from the attack of street dogs in Kannur

Prime Minister Narendra Modi has expressed regret regarding the incident. The Prime Minister’s National Relief Fund has announced a compensation of Rs 2 lakh each to the families of the deceased and Rs 50,000 each to the injured.