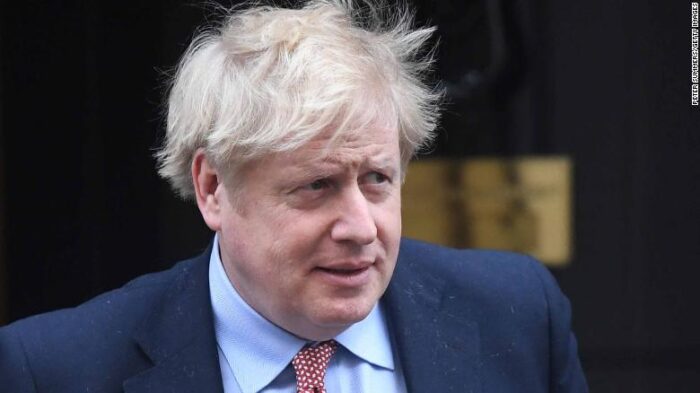 London: Coronavirus has changed everything. Make sense of it all with the Waugh Zone, our evening politics briefing. Sign up now. Boris Johnson has announced the two-metre social-distancing rule will be cut to one-metre, but only where another protection – such as face coverings – is possible.  The new “one-metre plus” guidance on coronavirus for England was announced by the prime minister on Tuesday as he confirmed pubs, restaurants, museums and cinemas will be allowed to reopen from July 4.

It says people must stay two metres apart, but can come within one metre of each other from July 4 provided one “mitigation” is in place.  Among the protective measures listed were: a screen, facing away from each other, hand-washing, a face covering and minimising contact with others.

Johnson said the new rules will be reviewed on July 21 and if there is a resurgence of the disease, ministers could bring back some lockdown restrictions. He told MPs the number of new infections “is now declining by between 2% and 4% every day”.  Turning to cutting the two-metre rule, he added: “Where it is possible to keep two metres apart, people should. “But where it is not, we will advise people to keep a social distance of one metre-plus, meaning they should remain one metre apart while taking mitigations to reduce the risk of transmission.” The move on social distancing follows intense pressure from some Tory MPs who have said easing the two-metre requirement is key to reopening the hard-pressed hospitality sector in England.

Many pubs and restaurants have warned that it would simply not be viable for them to operate on such terms and have underlined that the World Health Organisation’s guidance is one-metre.  Johnson said every step in easing the lockdown has been “scrupulously weighed”. He said: “We cannot lift all the restrictions at once so we have to make difficult judgments.  “And every step is scrupulously weighed against the evidence.” He added: “Our principle is to trust the British public to use their common sense in the full knowledge of the risks, remembering that the more we open up, the more vigilant we will need to be.” Detailed sector-by-sector guidance will be published for businesses – from hotels to hairdressers – on how to reopen in a Covid-secure manner.

It could mean introducing one-way systems, spaced queuing, increased ventilation, and pre-booked tickets to ensure people can return safely. It has also been suggested venues could install perspex screens, altering seating arrangements and requiring the wearing of face coverings to mitigate the risk of spreading the disease as the rules are eased. Customers at pubs and bars may have to sign guest books with their names and contact details so they could be traced if they come into contact with someone who is infected.

Health secretary Matt Hancock said yesterday government was able to act because the numbers of new coronavirus cases, admissions to hospital, and deaths from the diseases were all continuing to fall. He told the daily No. 10 briefing on Monday that just one-in-1,700 people were now estimated to be infected with the virus, compared to one-in-400 a month ago. But some scientists have, however, expressed concern the government is moving too quickly, and that its track-and-trace system to contain any fresh outbreaks is not fully up and running.

Dr Jenny Harries, the deputy chief medical officer for England, said that even as the rules were eased people still needed to follow social distancing, including regular hand-washing and good respiratory hygiene.

“There is a critical point here that says just because life is feeling a bit more back to normal don’t suddenly jump to where you were this time last year. We need to learn to go forward with restrictions in our lives,” she said.