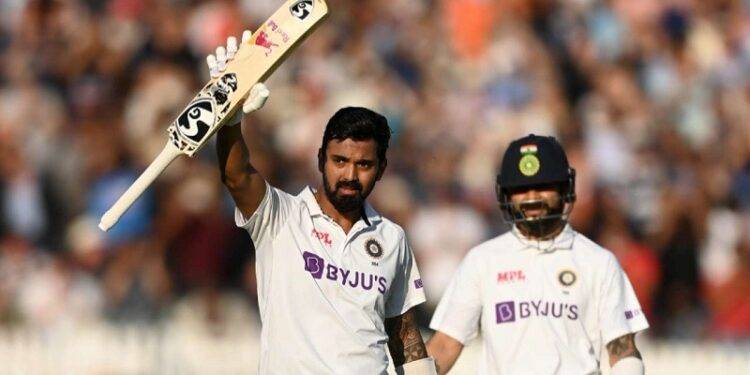 KL Rahul gave England a lesson in how to bat in tough conditions with the opener’s composed unbeaten century leaving India well-placed on 276-3 at stumps on the first day of the second Test at Lord’s on Thursday.

Rahul was initially outshone by Rohit Sharma, who made 83 in their fine stand of 126 — the first century partnership by an overseas opening pair in a Test in England since 2016, when Sri Lanka’s Dimuth Karunaratne and Kaushal Silva also achieved the feat at Lord’s.

But, while patient in defence and showing good judgement in leaving balls outside off stump, Rahul was still 127 not out at the close, having batted out the day. Together with India captain Virat Kohli, he shared a third wicket stand of 117.

One consolation for England was what the new ball did for star batsman Kohli, out for an increasingly fluent 42 before stumps after edging Ollie Robinson to opposing captain Joe Root at first slip. Ajinkya Rahane was one not out after India decided against sending in a nightwatchman.

Earlier, Rahul drove Mark Wood through the covers for four to go to 98 before a late cut boundary off the fast bowler the ninth four of his innings saw him to a 212-ball hundred that also included a six against recalled spinner Moeen Ali, one of three changes to England’s XI.

His sixth century in 38 Tests, and third against England, followed Rahul’s 84 in last week’s rain-marred drawn series opener in Nottingham. That match saw the 29-year-old Rahul make his return to Test cricket after a near two-year absence after Mayank Agarwal was hit in the head batting in the Trent Bridge nets.