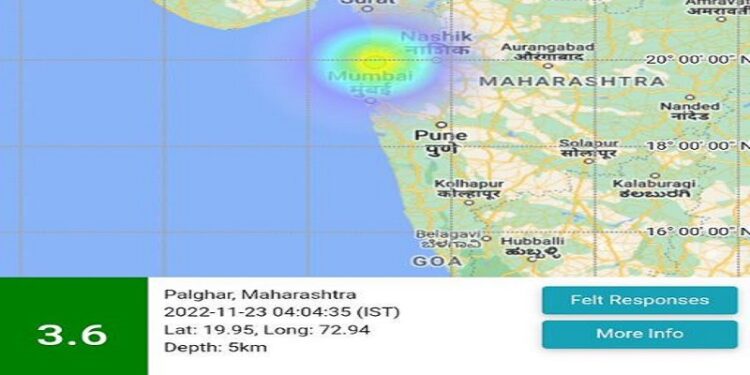 Earthquake in Maharashtra: According to the Centre for Seismology (NCS), the tremours were felt around 4 am in 89 kilometres west of Nashik. It further stated that the depth of the quake was 5 km below the ground. An earthquake of magnitude 3.6 on the Richter Scale hit Maharashtra’s Nashik district in the wee hours of Wednesday.

However, there was no casualty or damage has been reported so far due to the earthquake in Nashik. Meanwhile, an earthquake of magnitude 3.8 also occurred 58km North-West-North of Basar in Arunachal Pradesh around 07:01 am today (November 23). As per NCS, the depth of the earthquake was 10 km below the ground.

Earthquakes in several regions of country

It should be noted here that several regions in the country experienced earthquakes in the month of November. Earlier on November 14, Punjab’s Amritsar was hit by an earthquake of 4.1 magnitude on the Richter scale around 3.42 am.

On November 10, an earthquake of magnitude 5.7 jolted Arunachal Pradesh, sending tremors in several northeastern states. Notably, strong tremors were felt across Delhi, Noida, Ghaziabad, and across north India on November 9 after a 6.3 magnitude earthquake struck the Himalayan region near Pithoragarh in Uttarakhand along the Nepal border.