by News Next Desk
in GULF NEWS, TEMPLE 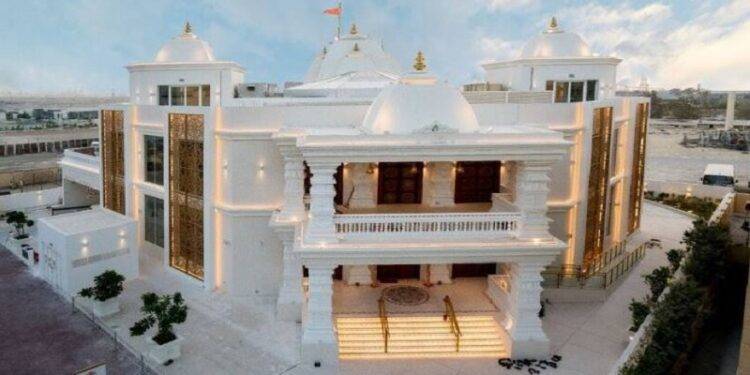 The first ever independent and standalone Hindu temple in Dubai is all set to be inaugurated on October 4, a day before Dussehra. The temple is located at ‘Worship Village’ in Jebel Ali. The area also houses several churches and a gurdwara. Dubai Hindu Temple Grand Opening today: Public Entry, Timings and Other Details.

As per Khaleej Times, it is an extension of Sindhi Guru Darbar Temple, which is one of the oldest Hindu temples in the United Arab Emirates (UAE). The temple will be open to the public from October 5. The foundation of the temple was laid in 2020, fulfilling the decade-long demand of Hindus in the region.

The temple can accommodate as many as 1200 devotees on any given day. Gulf News quoted Temple trustee Raju Shroff as saying, “With the benevolence of the Rulers of the UAE and the gracious support of the Community Development Authority (CDA), we are holding the official inaugural ceremony of the Hindu Temple Dubai tomorrow evening.” He added that public entry will be restricted on the inauguration day and requested the devotees not to visit the temple before October 5.

Dubai Hindu Temple Grand Opening today and to make the ‘darshan’ easier for the devotees, the temple management has installed a QR-based appointment system on its online platforms. As per the temple’s official website, it will remain open from 6:30 AM to 8 PM on Dussehra and other day also. Initially, only limited devotees were allowed to visit the temple. However, from October 5, there will be restrictions on the number of devotees, and they can enter the premises after booking an appointment.

AB de Villiers said will play for RCB in IPL 2023

Saudi Arabia made big change in visa rule for Indians

Sabarimala Temple: Mandal Pooja is open from today, booking and other details

Diwali Festival: Do not make these Rangoli designs on doorsteps