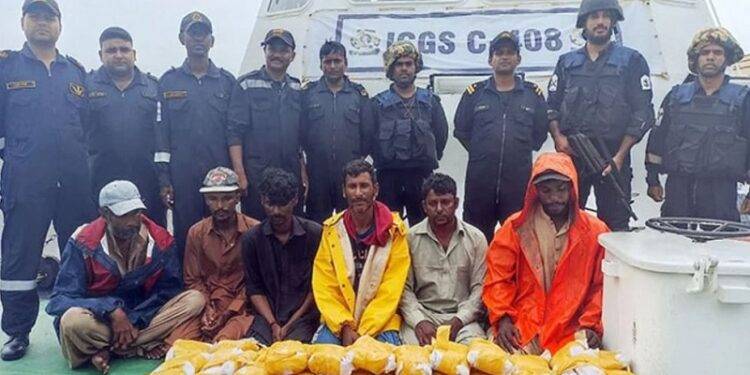 AHMEDABAD: The Gujarat Anti-Terrorism Squad in a joint operation with the Indian Coast Guard today seized Rs 200 crore from a Pakistani fishing boat in the Arabian Sea off the Gujarat coast. A senior ATS officer said that 40 kg of high-value heroin was seized. Drugs worth more than 200 crores seized, 6 Pakistani nationals arrested in Gujarat.

Officials said that six Pakistanis in the boat have also been arrested. A joint team of Coast Guard and ATS intercepted a Pakistani fishing boat carrying drugs in the middle of the sea near Jakhow port in Kutch district, the official said. Drugs worth more than 200 crores seized, 6 Pakistani nationals arrested in Gujarat.

It is said that they had planned to land the heroin on the coast of Gujarat and then transport it to Punjab by road. Acting on a specific tip-off, we intercepted a boat leaving Pakistan and arrested six Pakistani nationals with 40 kg of heroin, officials said.

Gujarat ATS and Coast Guard have been a deterrent to drug smuggling in the past. Foreign nationals have been arrested with huge quantities of narcotics that they planned to smuggle into India through the Gujarat coast.

The Gujarat Anti Terrorist Squad (ATS) in a joint operation with the Indian Coast Guard apprehended a Pakistani fishing boat with 40 kg of drugs worth Rs 200 crore in the Arabian Sea off the Gujarat coast on Wednesday morning.

According to PTI, six Pakistani crew members of the boat have also been apprehended and they are being brought to Jakhau for further investigation.

“The heroin was meant to be transported to Punjab by road after being offloaded on the Gujarat coast. Based on a specific tip-off, we intercepted the boat which left from Pakistan, and caught six Pakistani nationals with 40 kg of heroin,” an Indian Coast Guard official told PTI.