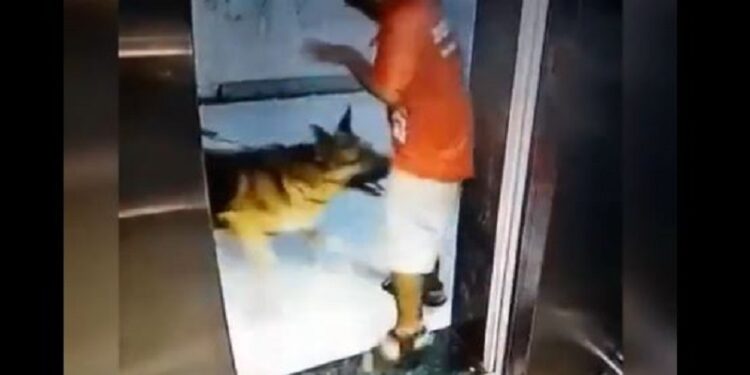 After a video of a dog biting a boy in a Ghaziabad housing society in lift went viral last week, another video of a similar incident is going viral. Dog bit private part of the Zomato boy in lift: See Viral Video. These two incidents also shows that the owners of the dog carrying them in the lift pose a danger to the second or third party. A viral video shows a Zomato delivery boy being bitten in the private part by a German Shepherd dog as he exits the lift.

As seen in the video, the Zomato food delivery man is about to leave the lift. At this time, a person with a dog is about to come inside the lift. Seeing the dog, the food delivery man hesitates to enter the elevator. This time he noticed that the dog had gone aside and tried to leave the lift again. This time the dog made a sudden attack and bit the private part. After the attack, the man’s pants can be seen bleeding and red.

A man named Arun Pudur shared the video of the incident on his Twitter account and described it as an incident that took place in Mumbai. “Mumbai: Dog bites Zomato delivery man’s private part while coming down from lift. A few days ago a child was also bitten. It is time to pass laws to punish dog owners. It’s getting dangerous,” read the caption.

Earlier, a pet dog bit a boy in the Ghaziabad Housing Society lift. A video went viral where the boy was writhing in pain but the dog’s owner was standing still as if nothing had happened. It can also be seen in the video that when the boy’s father asked with anxiety and anger, she tried to evade by arguing that she was not related.

Also Read: Mental Health: What should you do to be mentally healthy? Here are some tips

There are two incidents in front of our eyes that prove that it is dangerous for people who keep good breed or dangerous dogs to take them with them in the elevator. Building owners should enforce rules not to take dogs in elevators and governments should also pass laws to punish dog owners to ensure that such incidents do not recur. Netizens are also demanding this.