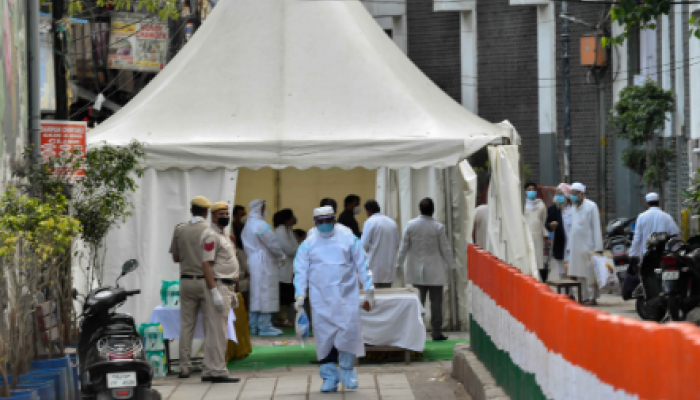 New Delhi: The Aam Aadmi Party-led Delhi government has asked the Delhi Police to register a FIR against a maulana for flouting quarantine protocols. This comes as almost 175 people in Delhi were taken to quarantine centres after they started showing symptoms of Covid-19 after attending a religious gathering in Nizamuddin area of Delhi.

While a lockdown had only been imposed on 24 March, the government had passed an order to curb the gathering of large number of people to control the spread of Covid-19. On Monday, there were 97 confirmed cases of the disease in Delhi and over 1,250 cases across the country.

This incident in Delhi has also spread to other states after people from Telangana and Jammu & Kashmir also tested positive after attending the event. In Telangana, six people who attended the event have died.

Lockdown was imposed in entire India on 24th March and it was the duty of every owner and administrator of every hotel, guesthouse, hostel and similar establishment to maintain social distancing. It looks like social distancing and quarantine protocols was not practiced here. Now it has come to our knowledge that the administrators violated these conditions and several cases of corona positive patients have been found here. Strong action would be taken against those in charge of this establishment, the government said in a statement. Livemint Reported.

The Delhi Police is now monitoring the area and is also using drones to ensure that no one steps out. According to reports, the religious event which saw close to 200 people in attendance was held without taking permission from authorities.

By this gross act of negligence many lives have been endangered. It was the responsibility of every citizen to proactively avoid such gathering of people during the lockdown and this is nothing but a criminal act. After the Centre informed us about the first positive patient and requested assistance we moved all symptomatic patients to our medical facilities and as a safety precaution all non symptomatic contacts have been moved to the quarantine centres, the statement added.

Telangana chief minister’s office has asked all those participated in the prayers to inform the officials concerned and that the government would conduct tests and offer treatment to them free of cost.