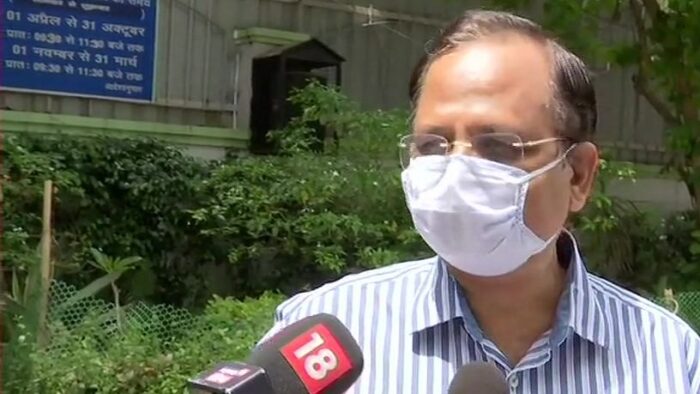 Delhi: Delhi Health Minister Satyendar Jain was shifted to Rajiv Gandhi Super Speciality Hospital in the national capital late on Monday night after there was a sudden drop in his oxygen levels and also on account of high fever

Jain was a part of Union Home Minister Amit Shah’s review meeting of the coronavirus crisis in the national capital. Among others who were present at the meeting include Union Health Minister Dr Harsh Vardhan, Lieutenant-Governor of Delhi Anil Baijal, Chief Minister Arvind Kejriwal and other high officials. Jain had attended several other meetings over the past few weeks. Media reports stated that Satyendra Jain has been placed on oxygen support and a coronavirus swab test done, whose results are due by Tuesday evening, sources say. The Delhi Health Minister has been busy interacting with doctors and officials over the last few weeks with the coronavirus situation in Delhi taking a turn for the worse.

A matter of concern now is that since Satyendar Jain has been interacting with Home Minister Amit Shah, Lieutenant-Governor Anil Baijal and others, his test results are being keenly awaited. Delhi Chief Minister Arvind Kejriwal tweeted to Satyendar Jain a speedy recovery. Kejriwal said that the Delhi Health Minister had been working tirelessly to serve the people of the state during the coronavirus crisis The Coronavirus situation in Delhi is worsening with the national capital among the worst hit states in the country. Delhi recorded 73 deaths on Monday in the highest spike over 24 hours.

The Delhi COVID-19 tally has now climbed to 42,829 with a spike in cases being recorded after the easing of lockdown norms. Chief Minister Arvind Kejriwal had clarified that speculation on another lock down in Delhi is baseless and that there are no such plans.