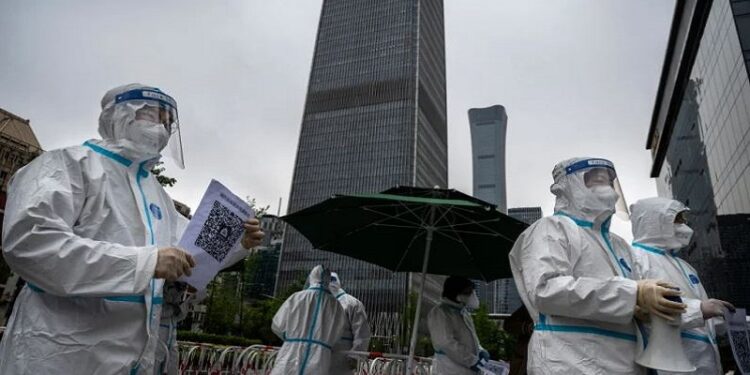 BEIJING: In the previous 24 hours, the number of new Covid cases rose by 31,444, the National Health Commission said on Thursday. This is the highest daily figure since the coronavirus was first detected in the central Chinese city of Wuhan in late 2019.China has imposed a Covid lockdown in several districts after protests broke out in key places, including the Chinese city of Zhengzhou, which is home to an iPhone factory  imposed by the Global Times reported.

Addressing a press conference Wednesday evening, city officials asked residents in the downtown area to stay indoors from Friday until next Tuesday. The Global Times reports that the number of new cases at the community level here comes amid protests at Foxconn’s flagship iPhone plant in the city of Zhengzhou. both men and women protested there. In a video released, protesters said they were frustrated by delayed bonus payments. The protest symbolizes a dangerous build-up of frustration with the country’s ultra-strict Covid rules.

Another video shows tear gas being tested and workers removing quarantine barriers. Some workers complained of being forced to share dormitories with colleagues who tested positive for Covid, Reuters reported. Denying the allegations, Foxconn said in a statement that it had fulfilled its payment agreements and that reports of infected staff living on campus with new hires were “false”.

“Regarding any violence, the company will continue to communicate with employees and the government to prevent similar incidents from happening again,” the company said. Earlier, a similar incident was reported in Zhengzhou city in October. The media reported that flocks of migrant workers from the country’s largest iPhone factory in Covid-hit Zhengzhou are fleeing to their hometowns.

Officials reported China’s first Covid death in six months, bringing the death toll to 5,232. Despite the relatively low number of cases and deaths compared to the US and other countries, China’s ruling Communist Party has committed to a “zero-Covid” strategy,

Beijing opened a hospital in the exhibition center. Admissions have been suspended at Beijing International Studies University after a case of the virus was found there. Some shopping malls and office buildings were closed and access to some apartment compounds was restricted.