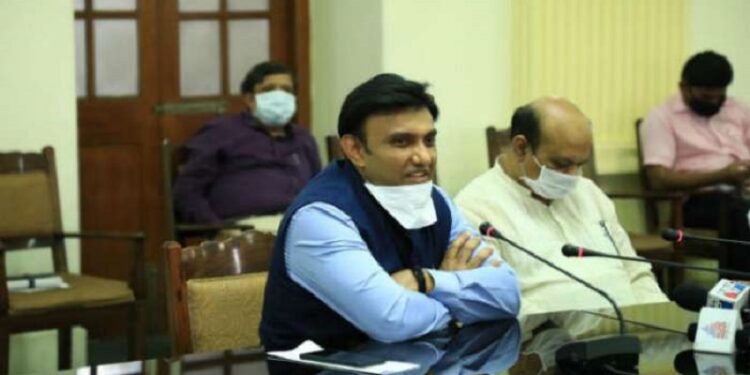 In a single day jump, the state of Karnataka log 41,457 new Covid-19 cases in the past 24 hours. Karnataka minister for Health and Family Welfare and Medical Education, Dr Sudhakar took to Twitter to say that the positivity rate in the state is now 22.30%.

The Karnataka Health Minister also informed that capital city Bengaluru itself reported 25,595 new Covid-19 cases in the past 24 hours.  8,353 people recovered from the novel coronavirus and were discharged from hospitals in the state in the past one day. Tuesday’s addition took the total active cases in the state to 2,50,381, which in Bengaluru only is 178000.

The IT hub of India Bengaluru reported 7 seven Covid related deaths in a day. Including those of Bengaluru, Karnataka reported 20 Covid deaths in the past 24 hours. The state has also conducted 1,85,872 in the past one day.  “A week on week increase of 250% is noticed in case numbers, now about 22000.

Hospitalisations continue to be low with only 1.3% of overall active cases currently in hospitals. Less than 0.5% are on critical beds,” news agency quoted Bruhat Bengaluru Mahanagara Palike. The state health minister on 15 January had informed that the case load of Bengaluru, which accounted for about 75% of the case load of Karnataka for the last two weeks, fell below 68% in the past 24 hours.

Former chief minister HD Kumaraswamy has said that to close state schools and colleges for at least 15 to 20 days to prevent the spread of covid-19. Speaking to media in Bengaluru, he said, coronavirus cases rises in schools, colleges and hostels in the Karnataka. A large number of teachers and students are infected with covid-19. Therefore, it is advisable to close school, college and hostels for at least 15 to 20 days by February 1.

He said that in some areas there is already online classes are started and better to continue to do so. People’s lives have been troubled by the Karnataka state night curfew. It is not known on what basis the experts have consulted. However, BJP leaders also have opposed the night curfew. People are also opposed to the night curfew.

He also said that government should also think about people life. BJP’s national general secretary CT Ravi and Union minister Prahlad Joshi have opposed the implementation of the Weekend Curfew. There is confusion among BJP leaders about the Weekend Curfew. He said the government also needs to focus on this.

Karnataka Revenue minister said Weekend Lockdown, school future will be deciding on Friday. Revenue Minister R Ashok informed to the reporters after CM meeting that there is no lockdown plan in state and not to get panic. There was also discussion on the weekend curfew and night curfew.