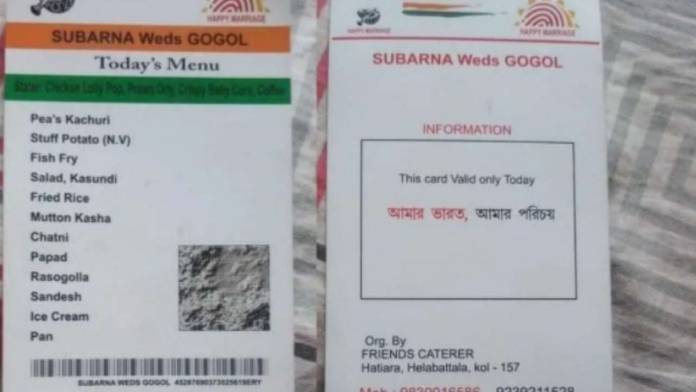 Weddings, these days have become a creative challenge, and couples are leaving no stone unturned to adapt unique styles to stand out from the crowd be it their wedding destination, outfit, or an invitation card that is nothing like an ordinary one.  A West Bengal couple astonished their guests and left social media in awe with their unusual wedding menu card, which was designed like an Aadhaar card.

The couple first posted the card on Facebook and since, then it has been circulating across all social media platforms. Speaking to media, the couple Gogol Saha and Subarna Das said that they were quite excited to see their wedding menu card being widely shared by people.

When asked how they planned such a creative menu card, Saha credited his wife for the idea saying, “It was my wife Subarna’s thought, and as we both support ‘Digital India’ what could have been a better way to show support than this?”.

He further said that the guests were surprised to see the menu card and some even joked if the Aadhaar card was mandatory to even attend weddings these days.“Many even asked me if I left my Aadhaar card on the dining table, and this was extremely funny,” added Saha. The couple got married on Monday (February 1) and both are residents of the Rajarhat area of Kolkata.