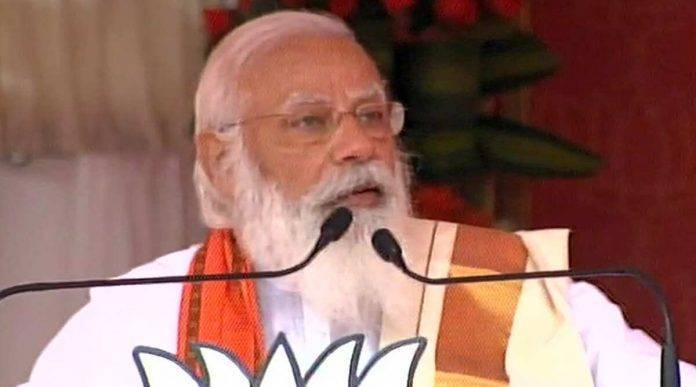 Chennai: Prime Minister Narendra Modi today targeted DMK’s A Raja for his unsavory remarks about Tamil Nadu CM EK Palaniswami and his mother, and said the comments showed the anti-women mindset of the DMK, as well as its alliance partner Congress. “They have launched their outdated 2g missile.

Their target is women of Tamil Nadu. People of TN are noting everything. They will never tolerate insult to women of the state. Today, Congress and DMK have disrespected women,” he said at a rally in the state. West Bengal chief minister Mamata Banerjee was heckled with Jai Shri Ram slogans by BJP supporters as she crossed the venue of union home minister Amit Shah’s roadshow in Nandigram today.

Banerjee was proceeding to the venue of her own roadshow when BJP supporters chased her and raised the slogans. Banerjee and Shah are holding back-to-back roadshows in Nandigram today as the attention turns towards the electoral battle between Chief Minister Mamata Banerjee and her protege-turned-foe Suvendu Adhikari in the high-profile constituency.

Banerjee has been camping in Nandigram from Sunday and is holding an 8-km roadshow starting from Khudiram More to Thakurchowk in Nandigram Block 2, followed by public meetings. Amit Shah’s roadshow started from Bheturia at 12pm. Bollywood star Mithun Chakraborty too is also expected to conduct a roadshow in Nandigram ahead of polling.