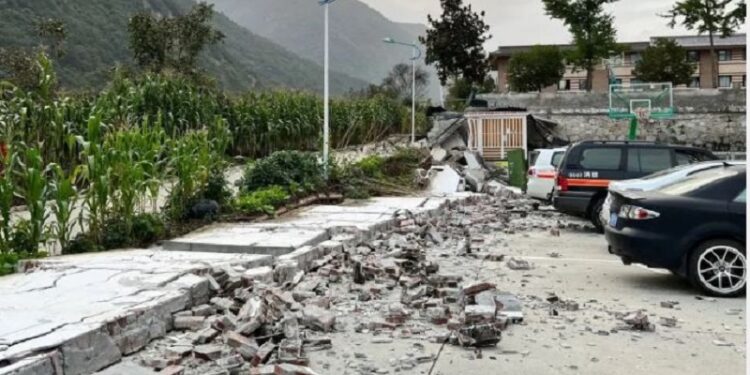 Beijing: State media reported that 46 people were killed in a powerful earthquake in southwest China on Monday. Houses are damaged due to Earthquake. Power cut in some areas. The US Geological Survey said a 6.6-magnitude earthquake struck southeast of Kangding city in Sichuan province. China Earthquake: 6.6 Magnitude Strong Earthquake in China; 46 people died, 30 people were injured.

There are several villages within a radius of 5 km from the epicenter. Around 46 people were killed and more than 30 injured. About 21 million people are trapped in their homes. Many cities suffered severe damage due to landslides caused by the earthquake.

Most people of the over 21-million strong population of Chengdu spent most part of the day outside their homes as aftershocks continued to shake the area.Infrastructure, including water, electricity, transportation and telecommunication services was also damaged.

“Heartfelt condolences to lives lost in the devastating earthquake in Sichuan on September 5 and prayers for the early recovery of the injured,” the Indian Embassy here tweeted.Chinese President Xi Jinping has ordered all-out rescue efforts to minimize casualties stressing that saving lives should be taken as the primary task.

Xi stressed strengthening quake monitoring, guarding against secondary disasters and properly accommodating those affected.While calling for utmost efforts to ensure the safety of people’s lives and property, Xi asked the Ministry of Emergency Management and other departments to send teams to Sichuan to guide the relief work and ordered the People’s Liberation Army and the People’s Armed Police Force to actively assist local disaster relief efforts.

The road to another town was blocked and telecommunication lines were cut in areas home to more than 10,000 people. The tremors forced offline some power stations in Garje and Yan regions. Earthquake-damaged buildings and a street strewn with rocks that fell into the gorge can be seen on CCTV