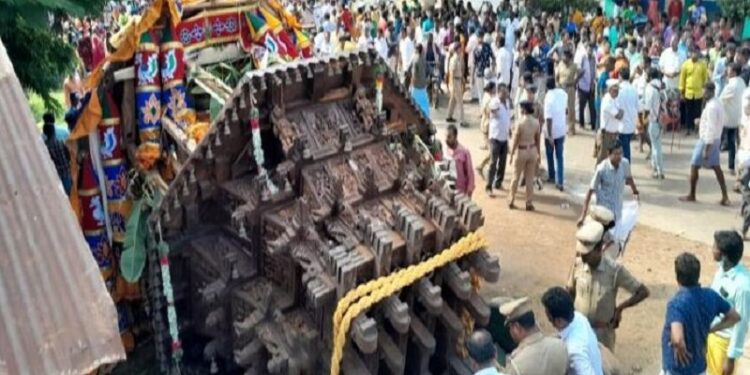 It is a Shiva temple. The founder of this temple is known as Kokarneswarar. Ambal’s name is Brighampal. The temple has shrines for Pillaiyar, Gangadhar and Saptha Kannai. There is a Sannidhi of Satasiva Brahmandra under the Mahi tree. The Kudaivarikkukai temple belongs to the reign of the first Pallava king Mahendra Varman.

As Sri Praghatambadhas comes as an epithet after the Thondaiman dynasty kings who ruled Pudukottai, it can be said that the family deity of the Thondaiman royal family is Brikhatambal here. Also the coin issued by Pudukottai kings was called Pudukottai Amman Kasu or Amman Salli. On one side of the coin was engraved the image of Goddess Prahatambal.

Brahmamotsavam in the month of Chitrai, Adipuram, Navratri in the month of Puratasi, Kanda Sashti in the month of Aippasi and Thaipusam are celebrated here in the temple. In this case, when the devotees were pulling the chariot by a rope on the 10th day of Adi month in Pudukottai Arulmiku Pragadambal Temple, the chariot overturned and accidently happened. It is said that 7 people were injured.