by News Next Desk
in CRIME, WORLD NEWS 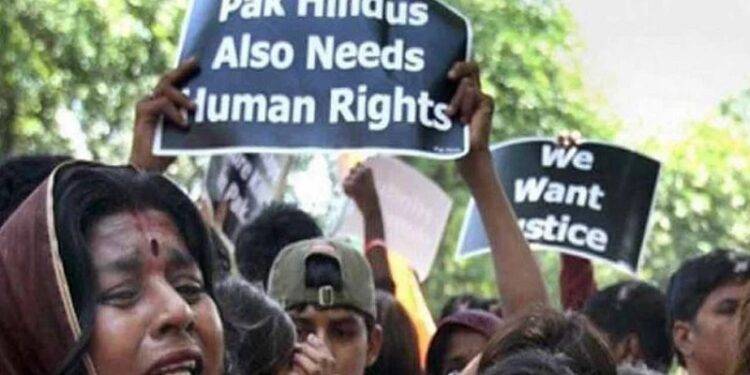 Islamabad: A local media reported that minorities in Pakistan protested against the attack on a Hindu woman who was falsely accused of theft. On Monday, a large number of people gathered in front of the district police office and district collector’s office in Bhavpur to protest against the ongoing atrocities on the Pakistani minorities. Cases of Violence and Rape against Minority Women are rise in Pakistan.

A Hindu woman was falsely accused of theft and beaten up on the same pretext, the protestors said. The victim is a resident of Pakistan and works as a housekeeper. Cases of Violence and Rape against Minority Women are rise in Pakistan.

According to reports, a mob attacked a Hindu woman’s residence and thrashed her. The protestors said that when the seriously injured victim was taken to the local primary health center, the doctor there refused to treat her and did not give her the required medical certificate.

Some leaders of minority communities who spoke at the protest rally demanded a proper and fair investigation into the case. He urged the government to take action against the woman’s assailant and the doctor.

Many atrocities are being committed against Pakistan’s minorities, including kidnapping, murder, rape and forced conversion, and they are living in miserable and very worrying conditions. Cases of violence against minorities and women are increasing day by day.

Abuse of blasphemy laws, which are cruel against minorities and members of the Muslim community, continues to increase to achieve personal hatred.

It is true that the Hindu and Christian communities in Pakistan are living in poverty, but the women of these communities are victims of the discriminatory attitudes of bureaucrats, political groups, religious parties, feudalism and the Muslim majority.

The problem of forced conversions and marriages is putting minority women at risk and getting them their legal rights in this country is a complex issue.