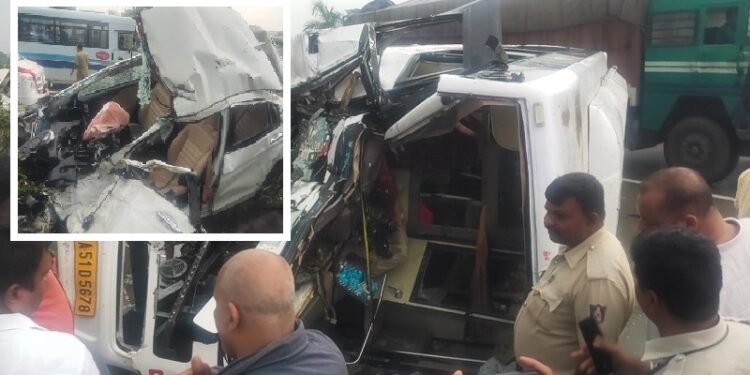 Bengaluru: Two young students died on the spot while several passengers of a bus sustained injuries when the car rammed the bus on NICE Road near Sompura Gate, Kengeri on Thursday evening. Car and private bus accident in Bengaluru, two students spot dead.

The deceased were identified as Leena G Naidu, 18, a resident of RR Nagar and first-year BBA student in RV College, Mysuru Road, and Sumukh S, 22, a final-year diploma student at MS Ramaiah College, who also lived in RR Nagar and he is basically from kota, Kundapura Taluk. Incident that occurred around 5.15pm, Traffic was disrupted for more than an hour following the accident Kengeri traffic police said.

Due to the impact, the private bus fell on its side. Police had to cut open the car roof to remove the mangled bodies. “Sumukh’s father Sudhakar, who reached the accident spot, fell unconscious upon seeing his body. He has been shifted to a private hospital,” police said. The accident happened when Sumukh lost control of the car and it jumped the lane and rammed the bus that was coming from the opposite direction.

“The car was going from PES College direction, while the bus was coming from Kengeri.  Sumukh lost control near BDA toll junction and veered to his right. One of the front tyres of the car burst and hit a Toyota Fortuner coming behind the private bus. However, occupants of the Fortuner escaped unhurt even as the vehicle sustained damage,” police said.