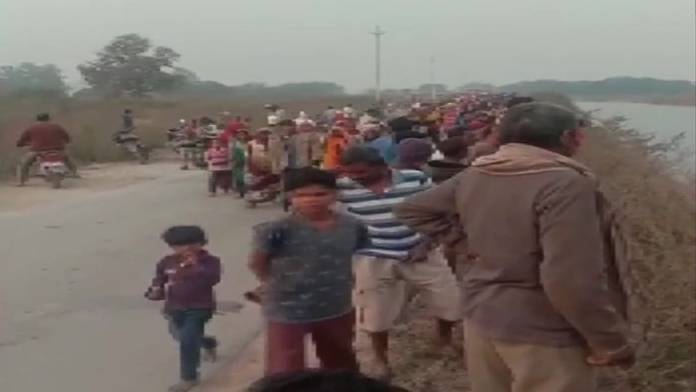 Madhya Pradesh: At least 18 people, including seven women, died while 20 others went missing after a bus fell off a bridge into a canal near Patna village in Madhya Pradesh’s Sidhi district on Tuesday morning, police said. A total of 18 bodies have been fished out of the Bansagar canal until now, said Umesh Joga, Inspector General (Rewa zone).

“At least 20 other passengers are feared missing, and a search and rescue operation is underway,” he told reporters. Joga said seven persons swam to safety after the bus landed into the canal near Patna village, around 80 kms away from the Sidhi district headquarter, around 8:30 AM. Sources said that at least 50 passengers were travelling in the ill-fated bus at the time of the accident.

Eye witnesses had said that the bus sank completely into the water and was not visible in the morning hours. Later, the district administration stopped the release of water into the canal from the Banganga project, which brought the water level down. The bus was then spotted at some distance away from the spot where it fell into the water, eye witnesses said.

The bus was retrieved out of the canal with the help of two cranes, officials said. Madhya Pradesh Chief Minister Shivraj Singh Chouhan said he ordered to stop the water outflow from the Bansagar dam so that the water level in the canal can go down, which will aid in rescue operations.

He tweeted that teams of the State Disaster Response Force (SDRF) and local authorities were conducting rescue operations at the spot. Without specifying the number of the deceased, the chief minister said many “precious lives” were lost in the accident. Expressing grief, the CM said he was praying for the safety of the missing persons.

Chouhan also said that efforts to save the missing passengers are underway. “I am continuously monitoring the situation. I am in touch with senior officials engaged in the rescue work,” he told reporters in Bhopal. The chief minister also announced the ex-gratia of Rs 5 lakh to kin of each victim

Meanwhile, in view of the accident, the CM has cancelled the ‘graha pravesha’ or house-warming ceremony to be attended virtually by Union Home Minister Amit Shah.