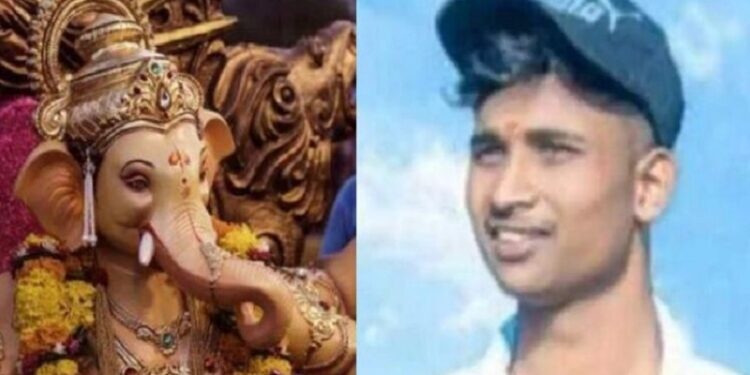 Belagavi: The incident which started during the Ganeshothsava Procession between two groups ended in the murder of a college student in Mugalihala village of Belagavi Yaragatti taluk of Belagavi district. Police have arrested four students in connection with the student murder case. Brutally Murdered of a student during Ganesha Procession: 4 students arrested.

Arjun Gowda Patila (20 years) is the murdered student. The students Udaya Bhandrolli (21 years), Subhasha Solannavar (21 years), Vithala Mishi (20 years) and another juvenile delinquent have been arrested by the police. Ganeshotsava was celebrated in a grand manner in the village this time. Brutally Murdered of a student during Ganesha Procession: 4 students arrested.

After 11 days of celebrations, a funeral procession was organized on Saturday. At this time, a fight started between the two groups. Arjun Gowda Patil was stabbed by a group of youths after the riot turned into disaster. Arjun Gowda died on the spot in the incident. Even though he was immediately admitted to the district hospital, Arjun Gowda died as the treatment failed.

After the incident, the accused fled from the spot. After receiving information about the incident, the police arrested a total of four people including the juvenile accused. It is learned that all of them are college students. The killing is said to have taken place due to personal enmity. The Yarahatti police have registered a case and are investigating.

Two separate tragedies occurred during the dismantling of Ganesha idols in Haryana’s Mahendergarh and Sonipat districts around Friday evening. Police have informed that four youths have drowned in the Mahendragarh canal and two in the Yamuna river in Sonipat.

It is said that this tragedy happened when more than 20 people of Jagadoli village had gone to worship Lord Ganesha. The police have informed that they have rescued four boys who were drowning. About 20-22 people had gone to the canal near Jagadoli village in Mahendragarh to dissolve the Ganesha idol. During this time, many drowned in the river. Mahendragarh DC JK Abeer has informed that four boys have lost their lives and four have been rescued.