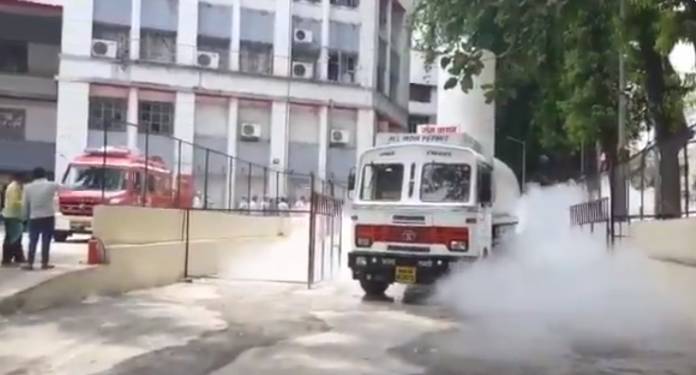 “As per the current information, 22 people have died due to the interrupted supply of oxygen at the Zakir Hussain municipal hospital. The patients were on ventilators as well as on oxygen supply, which got interrupted after the leakage in the oxygen supply tank,” he told reporters.

Earlier, the FDA Minister Dr Rajendra Shingane informed that at least 11 patients being treated in a hospital run by the Nashik Municipal Corporation (NMC) for the COVID-19 patients have died due to the incident.

“It’s an unfortunate incident. As per preliminary info, we’ve learnt that 11 people died. We’re trying to get a detailed report. We’ve ordered an enquiry as well. Those who are responsible will not be spared,” said FDA Minister Dr Rajendra Shingane on Nashik Oxygen tanker leak incident.

The officials were present at the spot and an operation to contain the leak is underway.

State health minister Rajesh Tope told reporters, “As per the information available with us, 11 patients who were on ventilators at the hospital in Nashik have died. The leakage was spotted at the oxygen tank which was supplying oxygen to these patients. The interrupted supply could be linked to the deaths of the 11 patients in the hospital.”

He also said that “the government will issue a press note after gathering more information and promised a probe into the matter. Some relatives of the deceased COVID-19 patients have alleged that the “lowered supply of oxygen” claimed the lives of their kin.