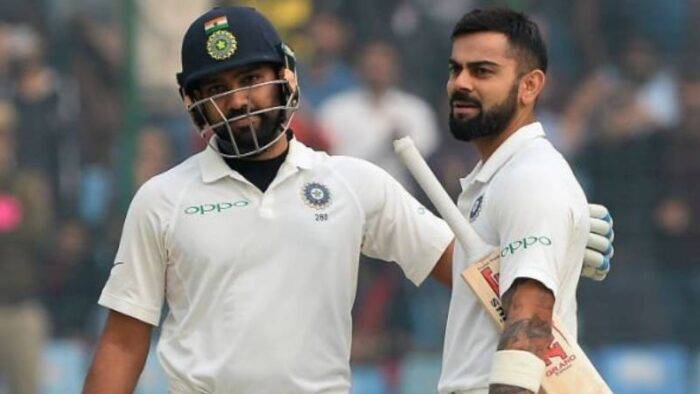 The Indian cricket team is scheduled to play England in one Test, three One-Day Internationals and three T20 Internationals in England in the month of July. The only Test match of the tour is the rescheduled Test for the five-match Test series during India’s tour of England in 2021. BCCI warnings to Rohit Sharma and Virat Kohli before England test.

As Team India gear up to take on England in the rescheduled fifth Test from last year, BCCI is likely to advise players to remain cautious after Ravichandran Ashwin returned a covid positive test and had to subsequently miss his flight to the UK.

The Board of Control for Cricket in India (BCCI) does not want to be caught napping in the UK and are likely to warn players from meeting fans and stepping out without masks. Last week, Rohit Sharma and Virat Kohli got themselves clicked with fans in Leicester and London as India prepare for the warm-up match against Leicestershire County Cricket Club.

“The Covid threat is reduced in the UK. But still players should be more careful. We will ask the team to be a little careful,” said Arun Dhumal BCCI treasurer to InsideSport. In the UK, COVID-19 is very much there with the country reporting over 10,000 new cases every day.

Just to ensure safety of players, a COVID-19 positive result will put the player in 5-day isolation and that could rule him out of the Edgbaston Test. India were leading 2-1 and before they could take on England in the fifth Test in Manchester, their contingent was hit with a series of COVID-19 cases and eventually the match was deferred.

Both Board of Control for Cricket in India (BCCI) and the England Cricket Board (ECB) mutually decided to reschedule the fifth Test in 2022, where India were already scheduled to play white-ball fixtures. India and England have faced each other 130 times in Test cricket alone.

Out of which, England won 49 battles whereas India turned victorious on 31 occasions with 50 matches ended with a draw. Both teams have met in 103 ODI matches with India having the better of England with 55 wins next to their opponent’s 43.