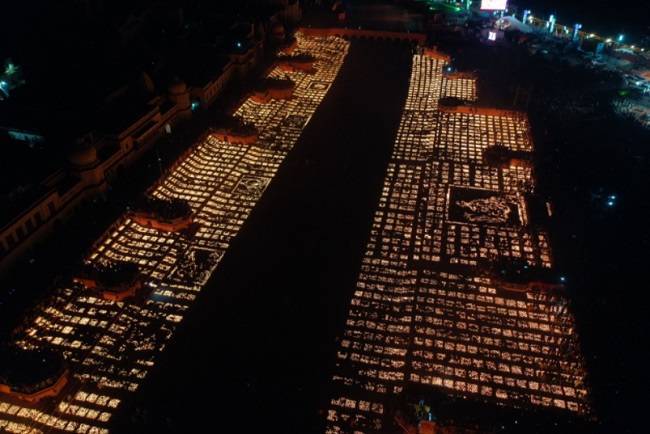 The Diwali event also saw the lighting of a record 5.84 lakh earthen lamps on the banks of the River Saryu in Ayodhya, thus making it to Guinness World Records. Several new development projects were launched to mark the occasion.

‘Our generation is not only fortunate to see the start of the construction of a Ram temple here but we also attended the historic event. In the struggle of 500 years, many saints passed away with a dream to see the start of construction. Prime Minister Narendra Modi had performed the ‘bhoomi pujan’ of a Supreme Court-mandated Ram temple in Ayodhya on August 5 this year.

The Bharatiya Janata Party (BJP) government in Uttar Pradesh started Deepotsav celebration in Ayodhya after Yogi Adityanath became the chief minister in March 2017.The celebrations began from Friday afternoon itself when a grand coronation procession of Lord Ram started from Saket College in Ayodhya to reach the riverbank after covering a stretch of about five kilometres. The procession has 11 tableaux, built on the Ramayana themes, participating in it.

The themes include Gurukul Shiksha, Ram-Sita Vivah, Kewat Prasang, Ram Darbaar, Shabri-Ram Milaap and Lanka Dahan among others. Besides the Saryu bank, the Ram Janmabhoomi, the site of upcoming Ram temple, was lit up by 11,000 earthen lamps in the evening, when a grand Aarti was held at the Saryu river after the sunset.

In her speech, the Governor said Ram and Ramrajya were ‘inseparable parts of the Indian culture’ and spoke at length about the ideals of the Maryada Purushottam.

She advised the people not to lower their guards in their fight against the Covid-19 pandemic till it was finished. Deputy CM Keshav Prasad Maurya, BJP state president Swatantra Dev Singh and a number of saints and ministers were also present on the occasion.

COVID negative report not mandatory for entering this temple from Thursday

Odisha: With devotees no longer required to carry a Covid-19 certificate to enter the Puri Jagannath Temple from Thursday, some semblance of pre-Covid normalcy...
Read more
TEMPLE

Sabarimala: The Sabarimala Lord Ayyappa temple will open for monthly five-day pooja on October 16 amid the rising cases of coronavirus COVID-19 pandemic. The...
Read more
TEMPLE

Sabarimala (Kerala): As the Sabarimala temple will be opening from Friday, Kerala Chief Minister Pinarayi Vijayan said that it will be mandatory to carry...
Read more
- Advertisment -