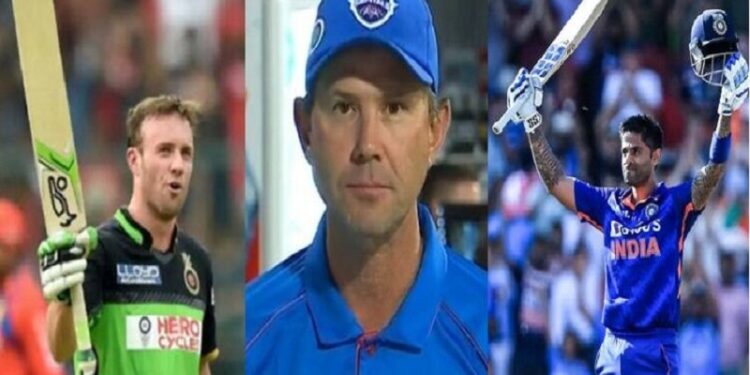 Suryakumar Yadav is known as Mr. 360 degree player of India. Mr. 360 of cricket world is AB de Villiers of South Africa. Like ABD, Suryakumar also has the ability to hit the ball to every corner of the field.Australian Legend Ricky Ponting: Suryakumar Yadav is India’s ABD Villiars

India’s new batting star Suryakumar Yadav is in career-best form. Surya, who scored a huge century in the last match of the T20 series of the last England tour, started the innings against West Indies and showed a good performance.Australian Legend Ricky Ponting: Suryakumar is India’s ABD Villiars

Suryakumar is known as Mr. 360 degree player of India. Mr. 360 of cricket world is AB de Villiers of South Africa. Like ABD, Suryakumar also has the ability to hit the ball to every corner of the field. Now Suryakumar has got Shahabbas’giri from Australia’s legendary player, former captain Ricky Ponting. “I see AB de Villiers in Suryakumar’s game,” Ponting praised the Mumbaikar’s game.

“Suryakumar scores runs in 360 degrees of the field. His game is reminiscent of AB de Villiers. Lap shot, late cut, hitting the ball over the wicket keeper’s head.. So Suriya has the ability to hit the ball to all parts of the field,” said Ricky Ponting in a special interview with ICC.

Ricky Ponting has advised Team India management to play Suryakumar at number 4. 32-year-old Suryakumar Yadav, who has played 12 T20 matches in 2022, has scored 428 runs with a century at a good average of 39.

Former cricketers are of the opinion that Suryakumar’s role is huge if India wants to win the Asia Cup and T20 World Cup. Mumbai’s right-handed batsman Suryakumar, who made his debut in international cricket last year, has climbed to the 2nd position in the ICC T20 ranking within a year.