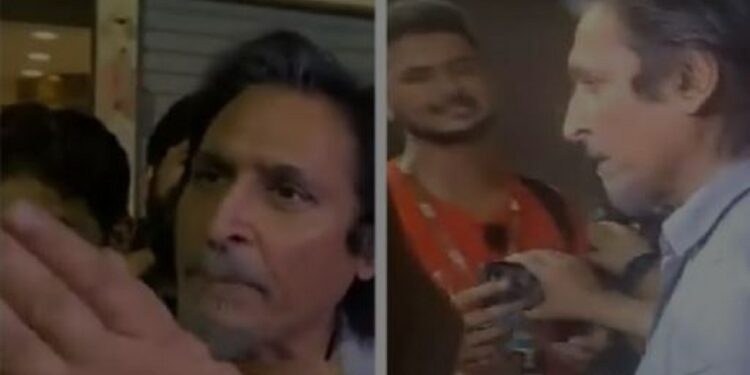 Sri Lanka emerged as the new cricketing superpower of the subcontinent as they defeated Pakistan by 23 runs to win their sixth Asia Cup title on Sunday. It was a massive heartbreak for Babar Azam and team who were stunned by the island nation on a second consecutive occasion in the tournament. After Pakistan lose match Asia Cup 2022: Ramiz Raja snatch Indian journalist phone, Video Viral.

Pakistan Cricket Board (PCB) chairman and former Pakistan captain Ramiz Raja was not a happy man after his side shocking loss to Dasun Shanaka-led Sri Lanka. After reducing Sri Lanka to 58/5 in the first innings, Pakistan failed to finish off the opposition with Bhanuka Rajapaksa scoring a brilliant 71 not out to lift the Lankans to 170.

After setting a challenging 171-run target, Dasun Shanaka and his boys bundled out Pakistan for 147 in 20 overs to win the high-voltage Asia Cup 2022 final. Babar Azam’s Pakistan were favourites to lift the Asia Cup 2022 with defending champions Team India crashing out before the final. But Sri Lanka dashed Pakistan’s hopes with a 24-run win in the final in Dubai on Sunday (September 11).

After the end of the game, Ramiz Raja snatch Indian journalist phone. PCB chairman Ramiz Raja, who was in attendance at the Dubai International Stadium, interacted with journalists and was seen in a verbal altercation with one of them. Raja wasn’t amused when an Indian journalist asked him whether Pakistan fans are unhappy over their side’s defeat. After the conclusion of the game, the Lankan dressing room was on cloud 9 and so were the fans who arrived at the Dubai International Stadium to watch the game.

But for the Pakistan cricket team and its supporters, it was another bitter pill to swallow. In fact, PCB chief Ramiz Raja, who was in attendance at the venue, had a verbal altercation with an Indian journalist on his way back. When asked if ‘awaam’ (people) were sad over Pakistan’s defeat, Raja seemed to be getting a bit furious. The Indian journalist asked, “ The people of Pakistan are very sad. What message would you give them?”.

The question wasn’t welcomed by the PCB chief as he replied saying, “Aap India se honge? Aap to bade khush honge? (Are you from India? You must be very happy then?)”. Not just that, Raja moved a few steps ahead and could be seen snatching the person’s mobile phone who asked the question. However, the PCB chief returned it right away and left the arena before answering a few more questions asked by the journalists present at the exit of the stadium.