News » SPORTS » Asia Cup 2022: Who is this special person who clicked a photo with King Kohli-Hitman? 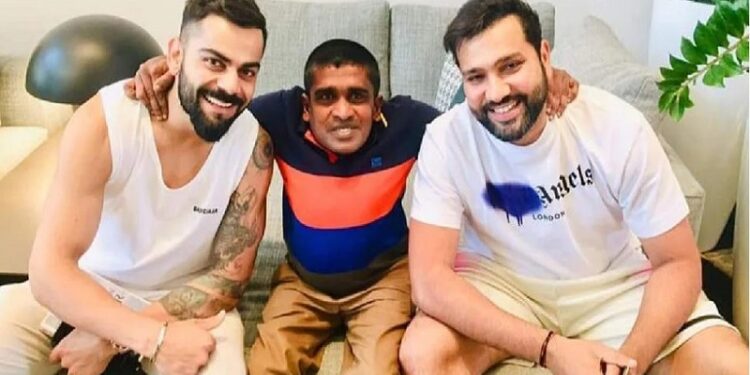 Team India got off to a flying start by beating Pakistan by five wickets in their opening match of the Asia Cup 2022 in Dubai on Sunday. Not only India-Pakistan fans but also Sri Lanka fans watched this special match. Gayan Senanayake, a Sri Lankan fan who especially likes Indian cricketers, watched the Indo-Pak match. Apart from that, he also got a chance to meet two stars of Team India. Asia Cup 2022: Who is this special person who clicked a photo with King Kohli-Hitman?

Gayan Senanayaka, who is physically challenged, is a true cricket fan. Gayan Senanayake, who is usually seen during Sri Lanka matches, has now come to Dubai to watch the Asia Cup. Meanwhile, he got a chance to meet two of his favorite players of Team India. Asia Cup 2022: Who is this special person who clicked a photo with King Kohli-Hitman?

Gayan Senanayaka expressed his happiness by sharing the clicked photo on social media. In this rare photo, Virat Kohli and Rohit Sharma pose on either side of Senanayaka. Now this photo has gone viral and King Kohli-Hitman fans are expressing huge appreciation.

Specially, a photo of Senanayaka, who is a true fan of Virat Kohli, went viral once again. In 2017, Senanayaka attended the wedding reception of Virat and his wife Anushka Sharma in Mumbai. Gayan Senanayaka was known to Indian cricket lovers through that photo.

Now Gayan Senanayaka has created a new wave on social media by sitting and clicking photos with two stars of Team India.