by News Next Desk
in TEMPLE, LATEST NEWS, STATE 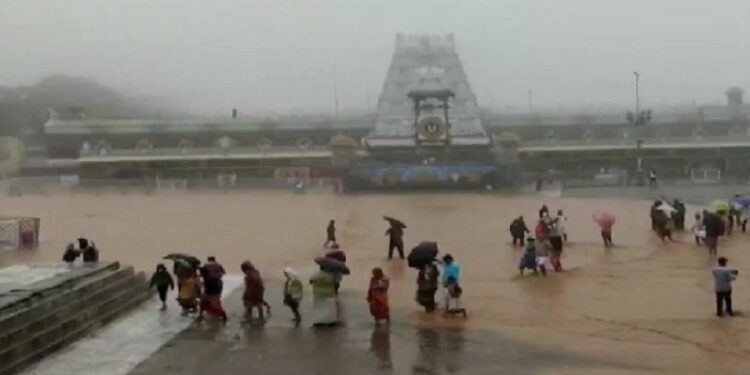 As heavy spells of rains disturb normal life in southern India states, Andhra Pradesh on Thursday saw roads inundated in Tirupati. Tirumala, the abode of Lord Venkateswara, was caught in a massive flood of unprecedented scale.

Leaving hundreds of pilgrims stranded even as a heavy downpour under the influence of a depression in Bay of Bengal battered the temple-town Tirupati and many parts of Chittoor district in Andhra Pradesh. Chief Minister YS Jagan Mohan Reddy directed the authorities to be vigilant and take necessary measures in wake of the inclement weather.

The four ‘maada streets’ adjoining the main temple on Tirumala Hills, remained flooded, as was the Vaikuntham queue complex (cellar). Darshan of the God was virtually stalled as pilgrims could not venture out because of the inundation.

The weather department has predicted moderate rainfall at most places and heavy to very heavy rainfall at few places and extremely heavy falls at isolated places very likely over Tamil Nadu, Puducherry and Karaikal.

For Friday, the IMD has said light to moderate rainfall at most places with heavy to very heavy rainfall very likely over Tamil Nadu, Puducherry and Karaikal and coastal Andhra Pradesh and heavy rainfall at isolated places over Rayalaseema and Karnataka.