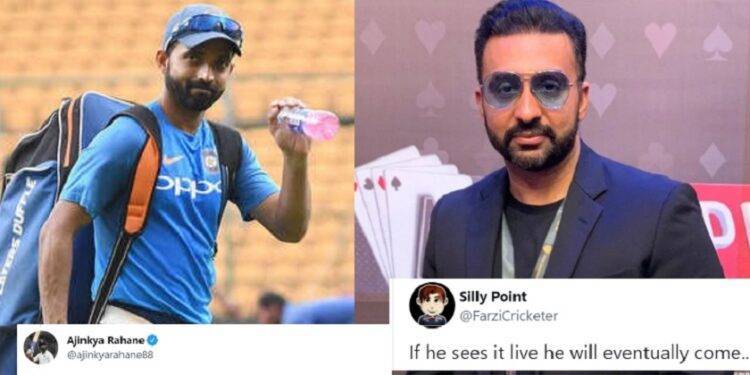 Raj Kundra’s recent activity remains unexpected by a renowned personality, the more puzzling fact arrives with the fact that the Twitteratti somehow included India’s Test vice-captain Ajinkya Rahane into the mix as well. The renowned businessman was arrested on Monday for producing pornographic films.

As a result, he was placed under arrest by the Mumbai police and Twitter went ablaze with disbelief. An innocent set of tweets from 2012 was unearthed which associated Rahane with Raj Kundra. While there is no way that Rahane is included in any ill-doing, the nature of the tweets made the netizens jokingly prod the player. Subsequently, A flood of memes and jokes outpoured once the tweets came to the surface.

Moreover, the absence of Ajinkya Rahane in the ongoing warm-up game also added fuel to the fire and more dismay for the deputy. He and Virat Kohli are absentees in the fixture against County Select XI. The middle-order ace is believed to be recuperating from an apparent hamstring niggle.

In the tweets, Rahane is seen to be commending Raj Kundra for an exceptional job. The businessman replied to Rahane’s tweet as well, suggesting he come and see it live. Rahane put in a second tweet as well thanking Kundra for the invite and assuring his presence for the same.

NEET UG exam to be held in Dubai this year for first time: Education ministry