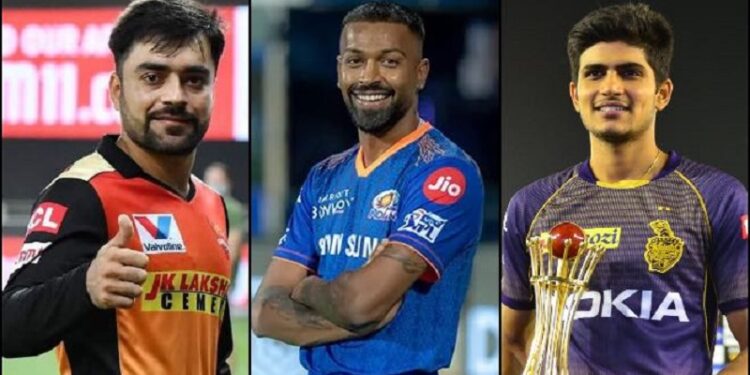 The Indian Premier League (IPL) 2022 season will witness a dramatic overhaul 10 teams will contest for the prestigious IPL trophy in the upcoming season with two new teams from Lucknow and Ahmedabad set to join the cash-rich league. In major development Ahmedabad finalised Hardik Pandya, Shubman Gill and Rashid Khan for IPL 2022

As such a mega auction will be held next month so that all 10 teams can finalise their squads. As per the rules of the IPL 2022 mega auction, the 8 teams that were already a part of the extravaganza previously, were allowed to retain a maximum of 4 players and the two new teams, from Lucknow and Ahmedabad would have to choose 3 players each as their picks ahead of the auction.

There’s a major update in the Ahmedabad camp on Tuesday morning, as per various reports, they have finalised their picks ahead of the IPL 2022 mega auction. The Ahmedabad based franchise have chosen Hardik Pandya, Shubman Gill and Rashid Khan as their draft pick for the upcoming IPL season. Ahmedabad franchise was very interested in Ishan Kishan as well, however, he wanted to go back to the auction pool, and there’s a high chance now that Ishan’s previous team Mumbai Indians (MI) might try and buy him again.

According to a report in ESPNCricinfo, Ahmedabad will pay Rs 15 Crores INR to both Rashid and Hardik, while the franchise will bag Gill for Rs 7 Crores INR. The same report also states that Hardik Pandya is likely to be named as captain of the Ahmedabad franchise which was bought by CVC Capital last year for a bid of INR 5625 crores.

Meanwhile, there are also reports coming in that former Indian seamer Ashish Nehra is likely to come on board as the head coach of the Ahmedabad franchise. Nehra, who retired from international cricket in 2017, had previously worked with Royal Challengers Bangalore (RCB) as their assistant coach.

The new teams have been given time until January 22 by the BCCI to pick three players of their choice before the auction.