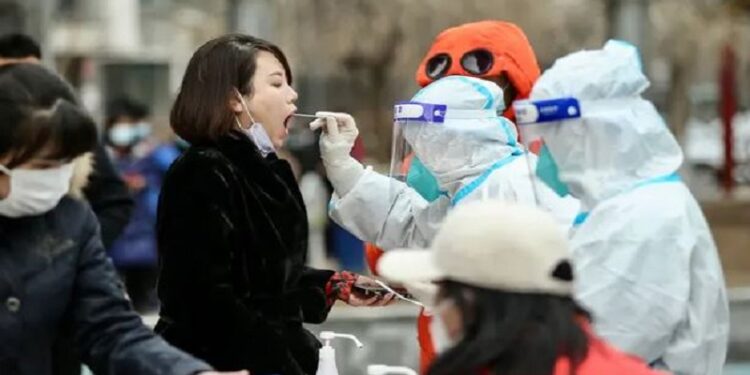 Beijing: The Chinese government on Tuesday put millions of people into lockdown again after several areas surrounding the Beijing capital reported a surge in Covid-19 infections. The lockdown has been imposed even when China is facing economic hurdles. Again lockdown in China:6.5 crore people have locked.

Around 40 lakh people in Hebei province have been ordered to stay home until the end of the week as officials rushed to curb a small surge in coronavirus. Again lockdown in China:6.5 crore people have locked.

More than 1.3 crore people living in Tianjin were asked to undergo mass testing from 6 am yesterday after 51 cases, mostly mild, were reported in the city.

People must show proof of negative test results within 24 hours to enter residential compounds, and restaurants must limit patrons to half of capacity, Longhua’s district authorities said. The new curbs will run until Saturday.

The southwestern city of Chengdu, with a population of 2.1 crore, ordered blanket closure of public entertainment and cultural venues from Tuesday.

It should be noted that China is the only major global economy sticking to a zero-Covid policy, and lockdowns, travel restrictions and mass testing have disrupted businesses and cooled growth.

The Chinese government’s sticking to zero-Covid policy despite resistance from Chinese people comes ahead of the ruling Communist Party’s 20th National Congress, which is likely to take place within the next three months.

The handling of the pandemic is widely seen as central to the political legacy of President Xi Jinping, who is set to be anointed for an unprecedented third term in office at the meeting.