News » SPORTS » After 17 years, England made a winning start on Pakistan soil 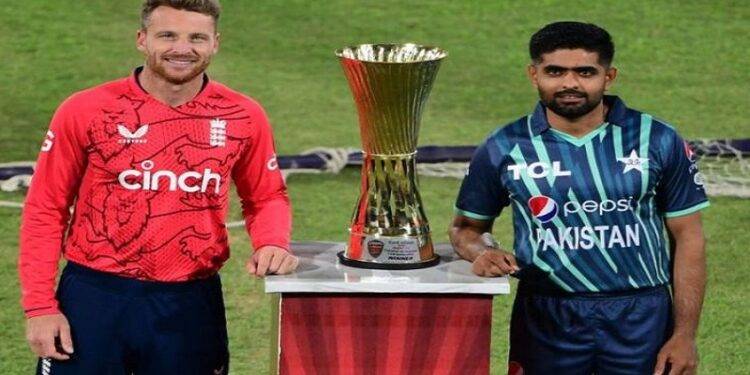 Before the T20 World Cup, Team India and Pakistan are playing T20 series with different countries. These two countries lost the first T20 match they played. On the one hand, Team India loss against the Aussies in the match, on the other hand, Pakistan lost to the English. After 17 years, the England team, which has stepped on the soil of Pakistan, has given a shock defeat to the host Pakistan in the first match. England won the first match of the 7 T20I series in Karachi by 6 wickets. After 17 years England made a winning start on Pakistan soil.

This match was special for both England and Hales. Batting first in this match, Pakistan managed to score only 158 runs for the loss of 7 wickets. After this, the England team chasing the target reached the target with 4 balls to spare, losing 4 wickets. After 17 years England made a winning start on Pakistan soil.

Alex Hales shine in England’s win. Hales, who returned to the team after 3 years, scored a 40-ball fifty with 7 boundaries. Another highlight of this match is that Hales, who entered the team after exactly 42 months, played his last match on 10 March 2019.

Hales, who opened the innings with Phil Salt, did not get good support. Salt, the opener, returned to the pavilion early. In such a situation, Hales, firmly entrenched at one end, along with David Malan, Ben Duckett, Harry Brooke took the team to the brink of victory.

Played a brilliant innings of 53 runs with 7 boundaries. Apart from him, Harry Brook scored an unbeaten 42 off 25 balls. As a result of his play, the England team chased the target as easily as drinking water. Earlier, Lukewood, who was the bane of the Pakistan team in bowling, was awarded the man of the match award by taking 3 important wickets by giving only 24 runs.

Also Read: How many savings accounts can be opened: Here is the information

After losing the toss and batting first, Pakistan’s batting department completely faded away against the English bowlers. Apart from opener Mohammad Rizwan, no one else could stay on the pitch for long. Opener Rizwan scored 68 off 46 balls, while skipper Babar Azam, rattled by successive failures, scored 31 runs. Elsewhere, Haider Ali scored 11 runs and Shaan Masood, who returned to the team after a long time, scored 7 runs, while Iftikhar Ahmed contributed 28 runs.