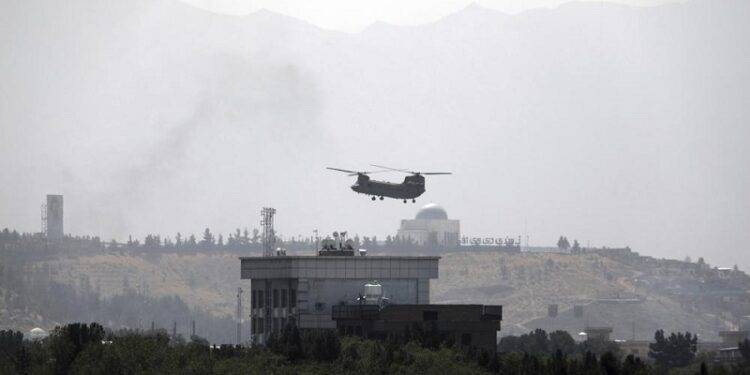 Kabul: Taliban fighters entered the outskirts of the Afghanistan capital on Sunday while panicked workers fled government offices and helicopters landed at the U.S. Embassy as the militants’ further tightened their grip on the country.

Three Afghan officials told The Associated Press that the Taliban were in the districts of Kalakan, Qarabagh and Paghman in the capital. The militants later pledged not to take the capital of Kabul “by force” as sporadic gunfire could be heard in the capital.

“No one’s life, property and dignity will be harmed and the lives of the citizens of Kabul will not be at risk,” the Taliban said. In a nationwide offensive that has taken just over a week, the Taliban has defeated, co-opted or sent Afghan security forces fleeing from wide swaths of the country, even with some air support by the U.S. military.

Rapid shuttle flights of Boeing CH-47 Chinook helicopters near the embassy began a few hours later after the militants seized the nearby city of Jalalabad. Diplomatic armored SUVs could be seen leaving the area around the post. The U.S. State Department did not immediately respond to questions about the movements.

However, wisps of smoke could be seen near the embassy’s roof as diplomats urgently destroyed sensitive documents, according to two American military officials who spoke on condition of anonymity because they were not authorized to discuss the situation. Sikorsky UH-60 Black Hawk helicopters, which typically carry armed troops, later landed near the embassy as well.

Tips for Pregnant Women to Keep Diabetes Levels Under Check