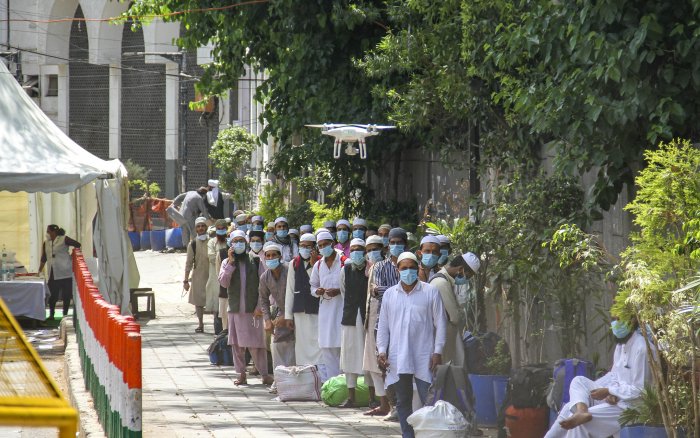 Delhi: Early this week when the security establishment and health workers came close to completing the evacuation of 2,300 people from the Tablighi Jamaat headquarters in central Delhi’s, investigations led the police to conclude that there were more foreigners staying in different mosques in the national capital. On 31 March, the Delhi Police sent an urgent message to the Delhi Government.

It was to seek help to locate the remaining Jamaat workers out of the city’s mosques. The police communication listed 16 mosques. Investigators were prepared to find 187 foreigners and two dozen Indian nationals who had shifted to the mosques after attending congregation meetings at the headquarters of the religious sect in Delhi’s Nizamuddin area

.It turns out they were horribly wrong. In four days, the combined teams of police, health workers and civil servants widened the net to cover a large number of mosques and have located over 800 foreigners linked to the Jamaat in the national capital.

And they still have some more distance to cover. The big fear is that many of them would turn out to be positive cases, and could have already infected many others,” the official said. A senior official in the Delhi government’s home department confirmed the development but underlined that he couldn’t put a number on the foreigners found.

We are still in the process of getting final reports from the field,” he told Hindustan Times. But there are some ballpark numbers from some districts. About 100 foreigners had been found in mosques of north-east district, 200 in south-east district, 170 in south district and 7 in west district, a senior official in the security establishment said. Security agencies who poured over the registers for foreigners maintained at the Markaz found 2,100 foreign nationals had touched base after landing in the country between March 1 and 18. Of them, 216 were still at the Jamaat headquarters when the crackdown took place and 824 had already left for chilla, or proselytising activities. We believe that the remaining 900-odd foreigners are mostly hiding in mosques around the city,” he said, adding that they were keeping their fingers crossed. Officials recall that by the time they evacuated the followers from the Markaz this week, 24 people had already tested positive and nearly 200 had symptoms. The Delhi government hasn’t received all the test reports. But the Markaz-linked cases already make up for two-thirds of all coronavirus patients in Delhi. By this evening, the Delhi government counted 386 confirmed coronavirus cases in the city. Of them, a whopping 259 are Markaz Masjid cases.

Reports from different parts of the country have also indicated that quite a few people who had attended the Nizamuddin Markaz congregation had tested positive. Three of Delhi’s six deaths are also linked to the Markaz, the biggest hot spot of the Covid-19 infections.