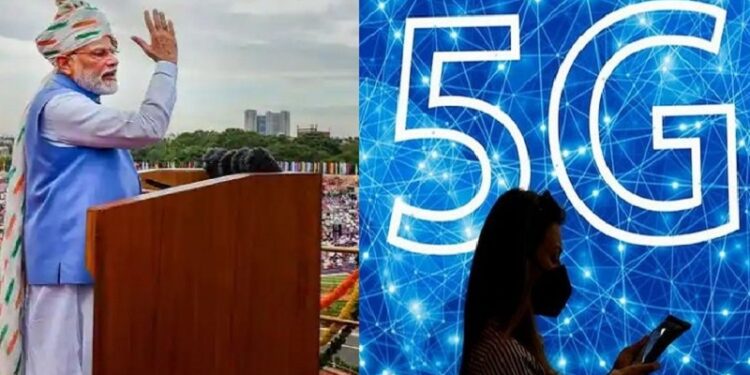 In a rousing address to the nation as India marks 75 years of freedom, Prime Minister Narendra Modi on Monday recalled the strength of women and sacrifices of freedom fighters during the country’s journey from one milestone to another. 5G launch in India: what PM Modi said in his Independence Day speech.

The 5G mobile services will start in India, said Prime Minister Narendra Modi during his Independence Day speech on Monday, adding that ‘Made-in-India’ technology will meet challenges of new India. He said that for the first time, India’s techade and digital technology will bring reforms in every area.

“India’s techade is here! With 5G, semiconductor manufacturing and Optical Fibre Cable (OFCs) in villages, we are bringing a revolution through Digital India to the grassroots level,” Modi said. The Digital India Movement along with the production of semiconductors, 5G networks and optical fibre network show strength in three sectors, that is, education, health facilities, and change in common man’s lives, PM Modi said.

“In India, industrial growth will come from the grassroots. Our Micro, Small and Medium Enterprises (MSMEs), street vendors and organized sector workers need to be strengthened,” he added. Speaking at the Red Fort today, the Prime Minister also vower to fight against corruption with full vigour. “In the last eight years, use of Aadhaar, Direct Benefit Transfer (DBT) and mobile phones were used to find Rs 2 lakh crore of black money,” he said.

Jio, a telecom giant from Reliance is expectedly working to launch a new Jio Phone 5G in India soon. It has been already confirmed by the telecom giant Reliance that it is working on the phone but it has not revealed the launch details of the smartphone, yet.

In the previous year, Reliance Jio launched the Jio Phone Next in collaboration with Google. This handset supports 4G but now the nation is ready for 5G and Reliance wants to debut in the 5G phone section. Jio Phone 5G is likely to come with bundled data and unlimited calling benefits just like the Jio Phone Next.