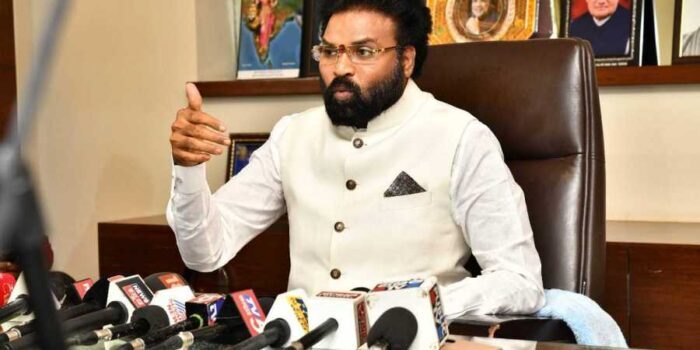 Bengaluru: Health Minister B Sriramulu on Wednesday said about 300 people from the state had attended the religious congregation of Tablighi Jamaat at Nizamuddin Markaz Masjid in New Delhi last month, and 40 of them have been identified and quarantined.

In a tweet, the Minister also said COVID-19 test reports of 12 of them have come out as negative. Stating that government has got information about 62 Malaysia and Indonesia nationals who had attended the congregation have come to Karnataka, in an another tweet Sriramulu said, 12 of them have been identified and quarantined. The Home Department and the Health Department will identify and quarantine those who are staying here without going to their country, he added. Karnataka Home Minister Basavaraj Bommai had last night said about 300 people from the state had attended the religious congregation of Tablighi Jamaat and efforts were on to identify and quarantine them.

Stating that those who attended the congregation, including few foreign nationals have travelled to various parts of the country after it was over, Bommai in a release issued on Tuesday night said it is found that several of them have been affected by COVID-19, and 6 people had died in Telangana, while one each in Andaman and Nicobar.

A 60-year old man from Sira in Tumukuru district of Karnataka who died last week and was positive for infection, had also attended the congregation, he said adding according to reports at least 62 foreign nationals have travelled to Karnataka. While 12 of them have travelled back, the remaining 50 of them still here have been quarantined and are undergoing tests, he added.

According to information, at least 300 people from different parts the state had attended the congregation at Nizamuddin, Bommai said, orders have been issued to quarantine all of them. This is a serious development, the Home Ministry was thoroughly investigating into it, a state level special team will be formed to keep a watch on them,” he added. However, earlier on Tuesday, Additional Chief Secretary-Health and Family Welfare Department Jawaid Akhtar had said the government has so far identified 78 people from the state who were “associated” with Tablighi Jamaat and has quarantined them.

We are not sure whether all of them attended the congregation held earlier this month, but as they might have come in contact with those who attended in one way or the other, they have been put under government quarantine,” Akhtar had told reporters. With many of them claiming that they have completed 14 days of quarantine already, we have also decided to put them for COVID-19 test, he had said adding that the 78 persons include some foreign nationals. The state health department has also appealed to any person who has attended Tablighi Jamaat Congregation to contact 080-29711171 Arogya Sahayavaani (health helpline)